Friday night, on my epic journey through the crowded traffic congested roads, I happen to be next to a very small motorcade containing someone not really important but wealthy enough to have a police escort and a car full of heavies following it.
Now in the middle of Tanjung Duren at 7pm no cares who you are or what you do, people are trying not crash, die on the road that is swamped in traffic and so it amuses highly how the rich and slightly famous can be so impertinent to have a policeman on a bike clear a path through the traffic (which is ultimately doomed to failure) so that the person can get to the next lounge appointment quicker than the other 20 million people in the city trying to get somewhere.
I see the fire trucks stuck in traffic and no one lifts a finger for them to get moving and they sit in traffic sirens wailing while nothing happens yet, if you get in the way of the oh so important motorcade you can be arrested. So after being bounced about by other bike etc on my way home, I was not in the most passive of moods and so riding past this assemble of vehicles I cut into the front of the policeman and slowed down as I wanted to turn right, lots of sirens and honking of horns followed so I slowed down further and rode slowly. I wont be bullied into getting out the way. What can they do anyway?
Of course I could have been arrested and probably out in jail as the legal system is two tiered and unjust for the normal person and those lacking financial support but that would have attracted attention in the press. But I never.
I am not an aggressive driver as I fear for my life most days but the sheer cheek of these jumped up people in black cars ignoring the issues everyone faces everyday is sadly all too typical.
Worse and this is worse are wedding cars with police escorts... whats that about?
So I guess the traffic is getting to me at the moment as there seems to be just some really dumb people on the roads at the moment which more often or not is not the case as I do see some good polite driving on a daily basis often from other bikers and cars but recently that seems to change, perhaps its the weather making people crazier than normal. 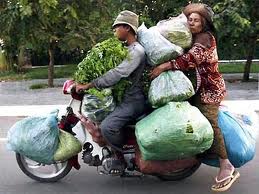 As long as I am in Jakarta I am sure to comment on the traffic and the worsening situation and at some point I will begin to ask, am I becoming like them, am I being assimilated? Is resistance futile? 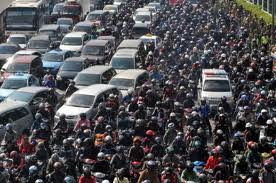 which one is me?
Posted by Unknown

Not much better in the UK where a pizza arrives at your door faster than the Ambulance you ordered...

Hi Luke,
Seems to be the same everywhere. What I usually do is tag behind those motorcades as if I am part of them hahaha..went thru all the red lights with them too.

Have a great week ahead Luke..and be safe ya

@srs Pizza should be delivered fast that has to be a law if not made one. I can't comment on phoning for Ambulances, thats even more pointless here.
@Umi tagging along is ok but as illegal as riding in the way! They are just annoying when traffic is already bad enough.
I will do all I can for a great week and make sure you have one too :)

Police escorts for non VIP (but rich people) are really unfair and annoying. Actually there has been regulation that strictly regulate their use but somehow violated.

I like the photos you posted... they remind meof my own country, the Philippines...

Police on wedding cars as escorts? The person must be a politician!!!!

HI Webbielady, thank you for visiting. Police for wedding cars probably just rich and figured that money can get you places quicker, which in Jakarta often is not the case.

Non-VIP police escort, but the rich people is really unfair and annoying. In fact there are, strictly regulate their use, but somehow violated.

Hello,
This blog very interesting & funny. I really enjoy this blog thanks for sharing us.

Thanks for sharing this information with us. We are providing the best escorts in Lahore, Escorts in Islamabad, and Escorts in Karachi. Our Islamabad Escorts, Lahore Escorts, and Karachi Escorts are top notch.

lahore
is probably the best office all over in Lahore.

Our office is giving new and high school young ladies

inconsistently. Their bodies are hot and delicate like an

girlcall girls young ladies are the most excellent and

they have strong figures. Their countenances and eyes are

girl in lahorecall girls in