Had a weekend off and so it was spent being very busy on Saturday and very relaxed on Sunday. Recently we haven't really done much due to Jeremy and work and because the weekend is really devoted to time with Jeremy I choose not to do much else.

But this was at the movies:

and being a JK Rowling fan, we took time out to see the movie and good it was too. And now the long wait for the next one.

However, before that, we took Jeremy to McDonald's at Kemang so he could play in the playground there. He has been there before and so was excited about going there again. We took him on the bike between myself and Yovita. He held on for dear life but then we all do that and he loved the trip, talking incessantly as he does about everything and anything.

After a McD breakfast (which is always welcome) Jeremy ran off into the tubes for about 45 minutes until he got frightened after getting into the top cube and not being able to get down. So dad got into the thing and forced him down. After some milk, and a chance to cool down he was raring to go. But we went back home and he can visit there again sometime soon. 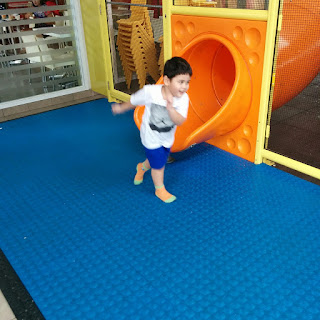 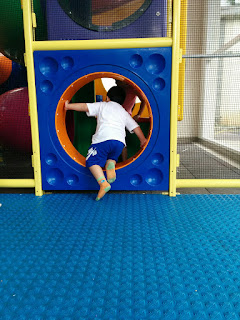 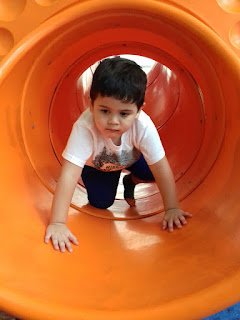 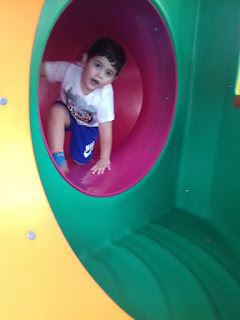 Never more happy than when he is running about and climbing and the play set at McD is fairly quiet and just about big enough for him to exercise some of his energy away.

After getting back we took a Grab to Setiabudi 1 which is a small plaza with coffee shops and restaurants in and a 4 screen cinema. And with it being Saturday lunchtime it was nice and quiet so on unlocking the doors we were first for tickets and pick of the seats and for 50,000 each it was a good place to go. there had to be leas than 30 people in the entire cinema which was nice.

Then on the way back we decided to stop and buy something for Jeremy and so we got him this. Hot Wheels Dead man's curve, which as he likes ghosts and spooky buildings was exactly what would keep him quiet for a few hours. I believe Jeremy is totally impressed as he has even tried to take to bed to sleep next too and when I woke up Sunday and this morning, there it was next to me and he was already playing with it.

Still its Lego for Christmas

Sunday saw us relaxing in a coffee shop for a hour or so and then after shopping playing with said toys and me trying get Jeremy focused enough to look at letters and begin to learn the alphabet, but it didn't go well so we did some colouring instead.

On Friday there was a huge political demonstration involving around 100,000 people who were gathered in Jakarta to protest about the current governor and his use of a word or phrase from the Quran. With the governor not being Muslim and misquoting the Quran he tipped the scales and has ended up in rather hot water with people demanding his arrest, he is put in prison, death and other things. That and they don't like a non Muslim being in charge.
So much so the president has demanded it gets sorted out and quickly.  Anyhow as a result, a load of hardliners, and other militant and peaceful Islamic groups from around the whole country met up in Jakarta, made the place come to a standstill and after 6pm (the time when the demonstration was legally meant to end) some of the less tolerant ones started kicking off resulting in a riot and lots of fear. Not really helpful because the rest of the day had been very well controlled so the riot only served to prove that there cant be a demonstration here without violence.

On Sunday, we decided to go to the National Monument and park with Jeremy so he can run about a bit and Yovita could go running and I could get up early and enjoy the park. So we did. After the usual farce of not getting a taxi to the house because no one can find it, we found one ourselves and headed to the Monas. It was very crowded for a change but it was also car free day and I guess people wanted to go out after the Friday issues. 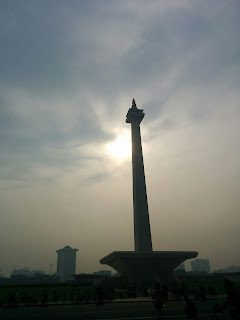 Jeremy loves to run and in the grounds he can do just that and its great because I can get to chase after him and it keeps me fit too! 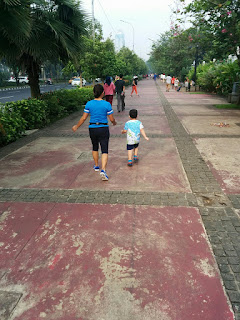 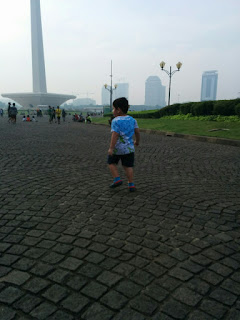 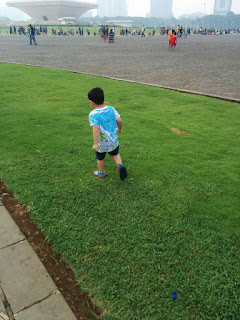 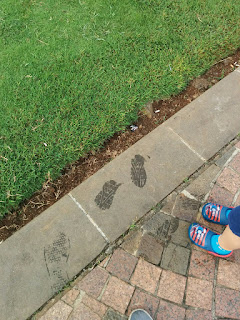 So we ran around the place until we saw buses and he wanted to go and look at them and then from there I saw a some police vehicles and many police men still around just in case there would be any further trouble around the area, so went to look at them and he became fascinated with the images from his shoe treads after walking on the wet grass for a while until Yovita came back and so we went off for breakfast. 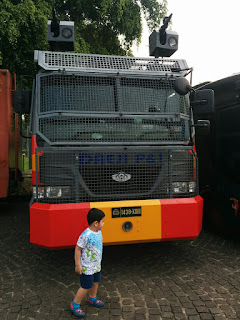 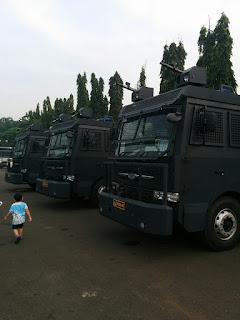 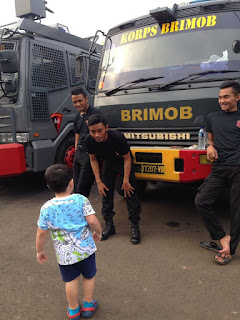 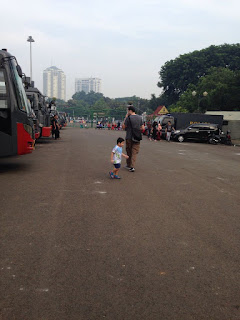 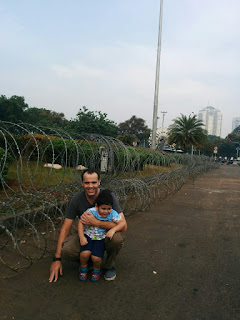 As usual we took the wrong gate and then the wrong bus so we got off the bus, and then took an Bajaji to McDonalds and ate there. We wanted to go shopping after the walk so we had the taxi take us to the local supermarket but we couldn't park as  it was keep fit and full of sweaty women stretching so we went to another one and eventually once the shopping was done got home.
Posted by Unknown No comments: comments

I recently was lucky enough to be able to visit my first school where my adventure in Indonesia and Jakarta began; EF Cengkareng. It was the first time I had been back to this part of the city for a good few years and getting there soon brought so many memories flooding back to when I was a teacher and school and area I lived and worked in.

The center itself had been completely updated and it is now nice and modern and for me still has a great feeling and environment. The teachers room had not been touched too much and so my old spot was still there and again the room felt the same as it did when I was a teacher. 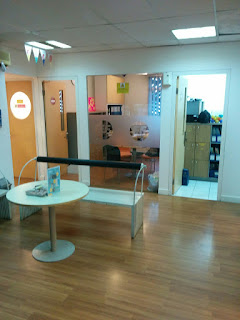 Unsurprisingly little had changed. Being out west there is a lot more space and green than where I live now and the pace of life seems a little less frantic. The traffic was its usual self as I remember it but everything was still the same basically around the center. Gone was some stores and hairdressers next to the EF and the Giant and AW had turned into a big Super Indo and I was told Pizza hut had moved as well. But the Dunkin Doughnuts was still there as was the dodgy car park booth and access. 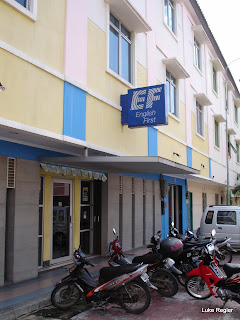 Sometimes it is nice to go back  somewhere and spend time there and just enjoy the memories of the place. It never made me want to return and stay but it made the day more fun. 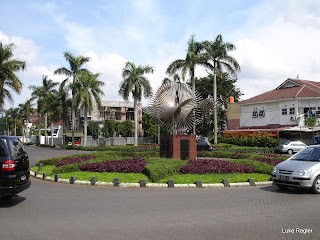