I have had to, over the last couple of weeks attend Church so Belvan can join the Catholic faith through holy communion. Not being Catholic or really any where near the word as a practising Christian the thought of spending 2 whole Sundays with god fearing folk should have stressed me out. However, I was pleasantly surprised by the most of the events but not all.
To accept communion in the Catholic church from the church I had to attend Santo Fransiskus at Tebet (which is off the beaten track a little and is part of a big school which I guess it Catholic).  My role in the Communion was to accompany Belvan to the alter and also have communion but since I don't that, I just had to stand and be polite.
So last Sunday we rolled up at the church for around 8am where we had to sit and be talked at for 3.5 hours by someone explaining the roles of the church and the family in this but I can't be sure. It was not that exciting and despite the Paster randomly breaking into song and being fed it did drag. The highlight before the service was when the Laptop containing the presentation decided to stop working.
Once I had been lectured enough, the church laid on lunch which was nice and then we had to attend the midday service. I am used to Church services and the best thing here is that you can read along to what is being said. And to be an observer to a service was very interesting as I have never seen a normal Sunday service. There were alter girls and some women who led some of the service which was modern. Lots of singing and prayers and the choir was pretty good.
The church itself was an odd shape almost the shape of a diamond and when the AC was on it was cool.
The service lasted around an hour and a quarter and then we had to sit about for the rehearsal for the children communion the following week.
There were about 50 children who were to recieve communion and so we were pushed about and told where to sit and stand etc and finally at 4pm!!!! we could go home. 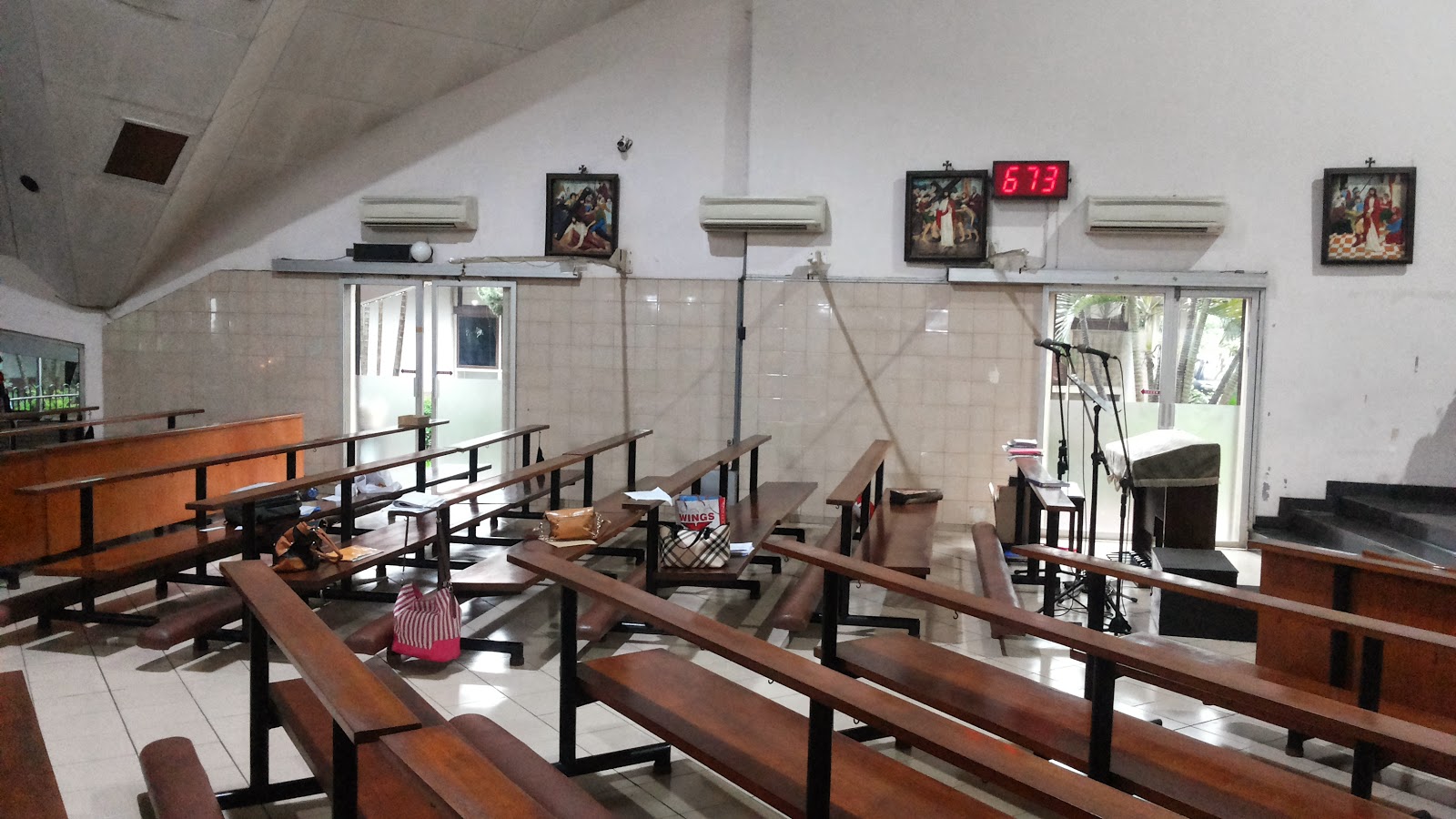 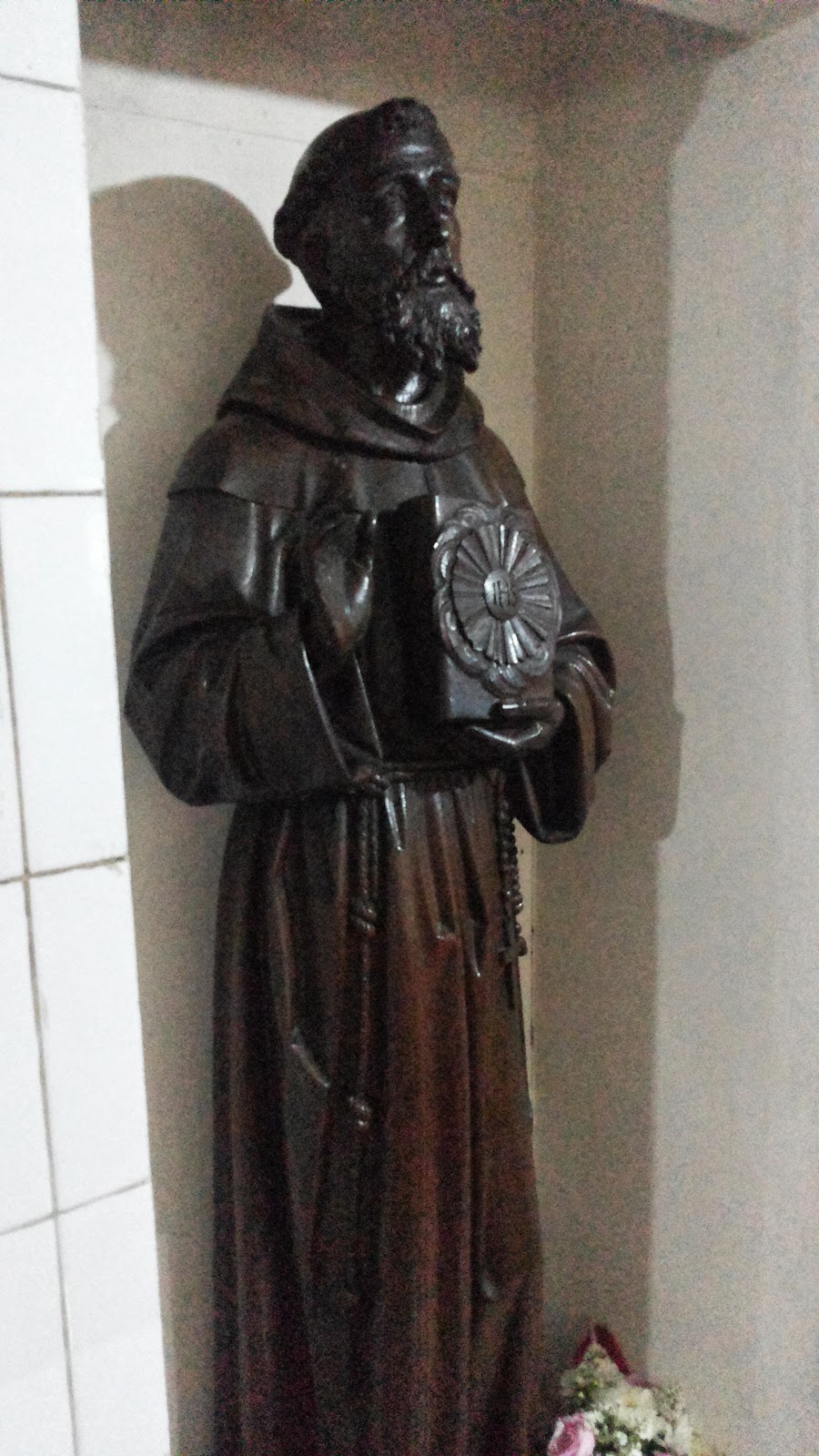 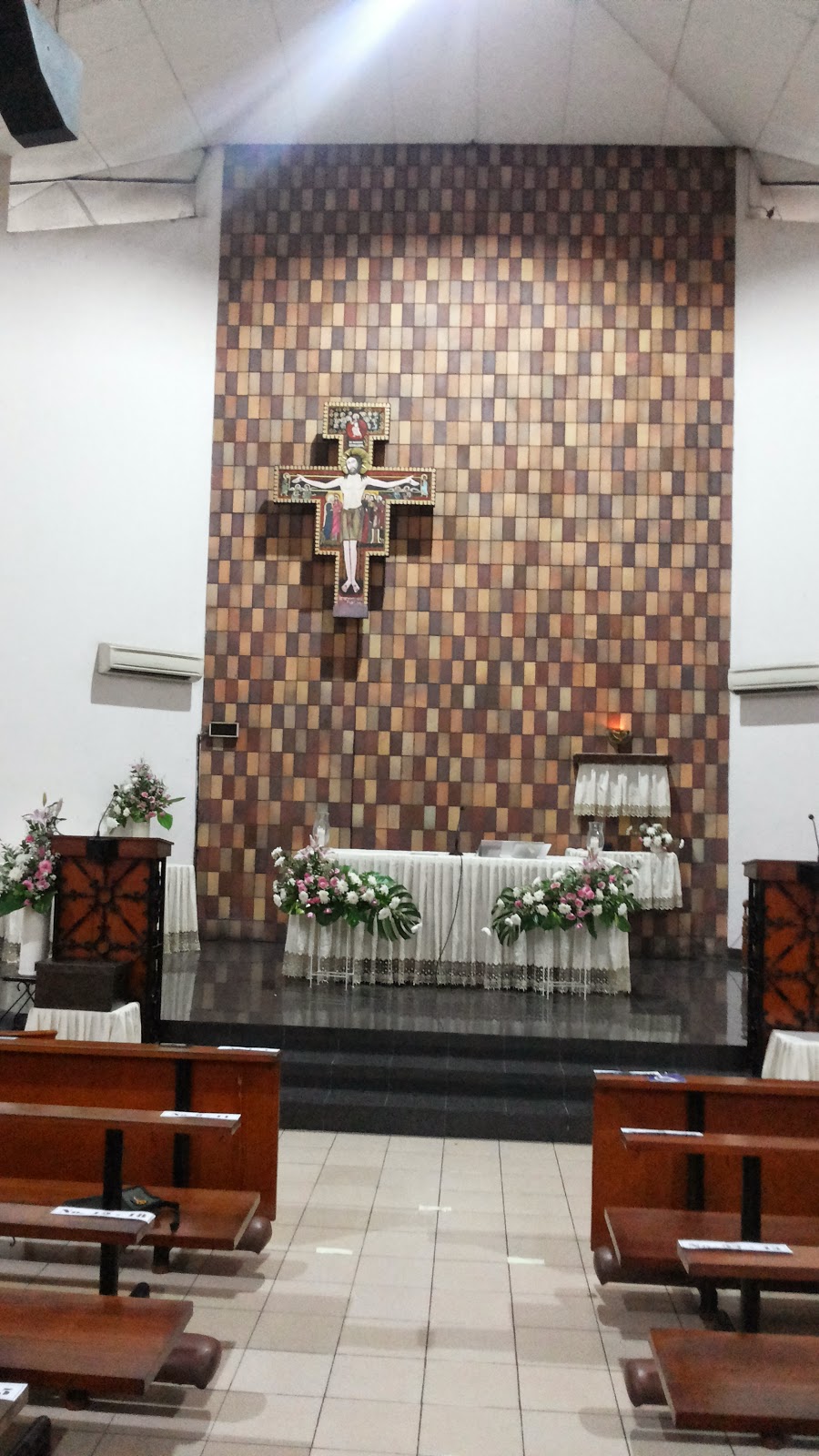 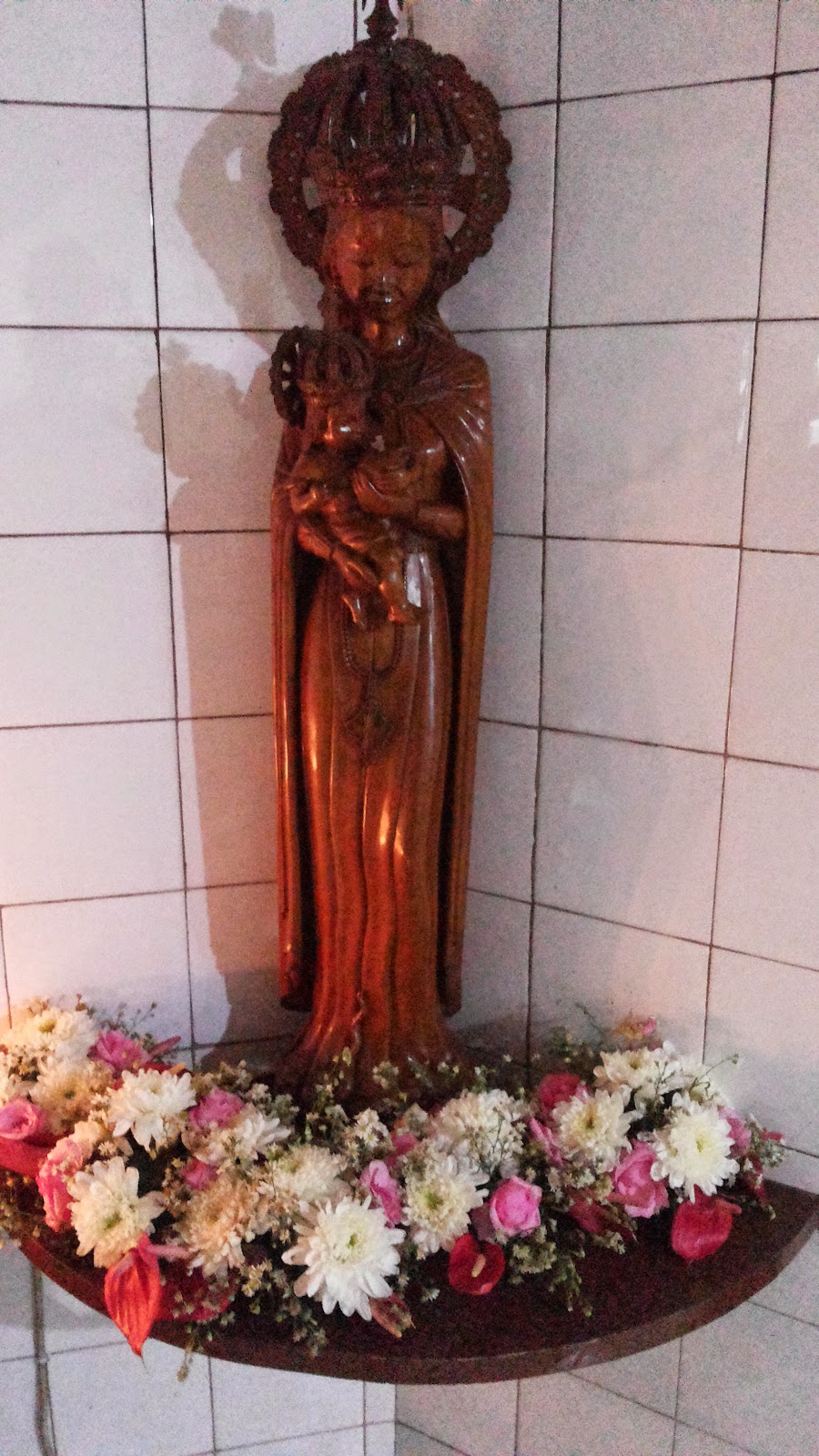 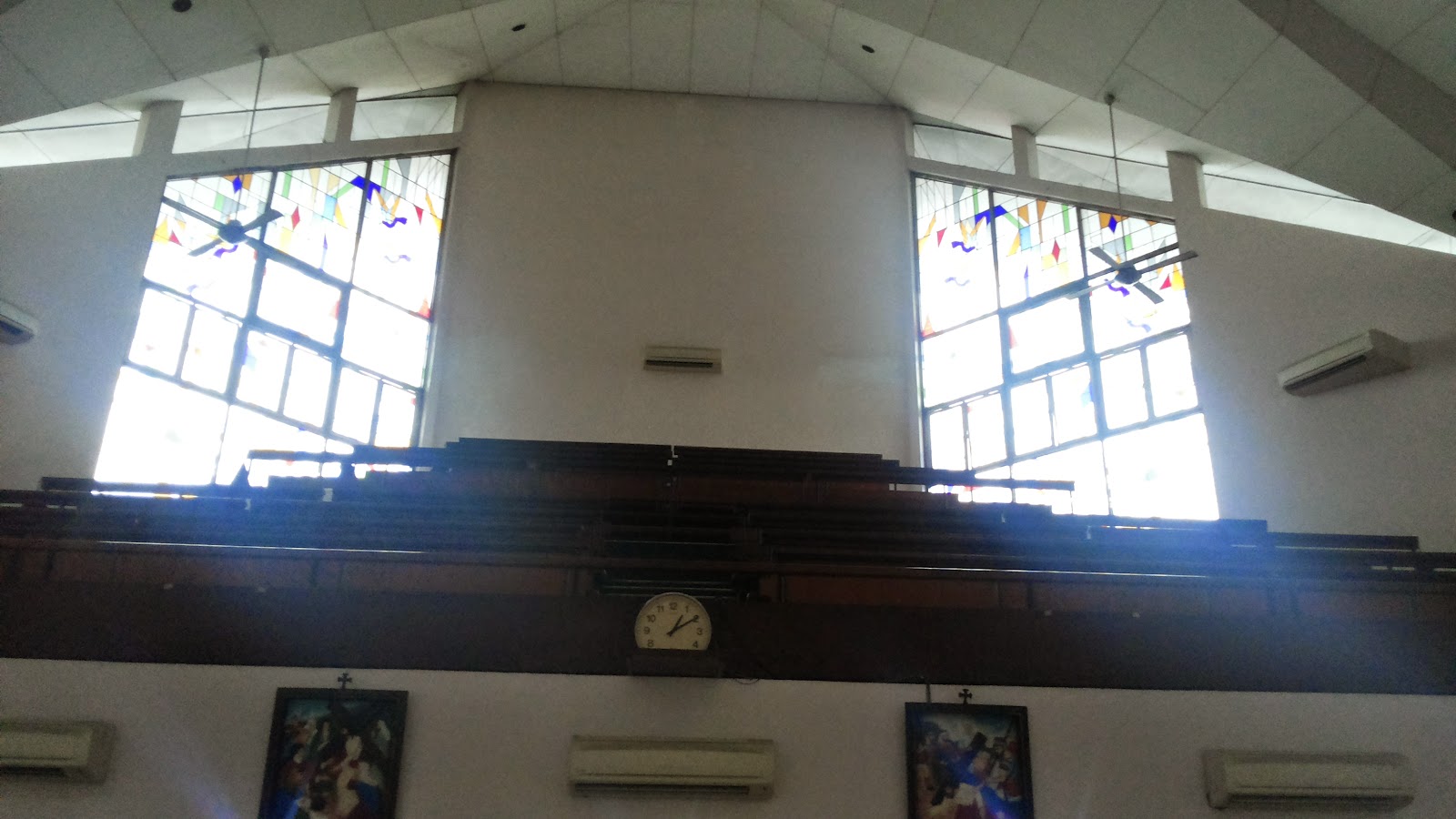 Yesterday was the big day for Belvan. Up early and at church by 8am in black trousers and a white shirt we had to wear a flower pose on the left of the shirt and have a lot of photos taken.
By 9.30 the service had begun and the small church was full with people outside to watch. Many family and friends I guess. Jeremy was there with his Aunt Uncle and Gran but happily he fell asleep and slept in the car while most of it was going on.
I had to sit with Yovita in a my designated spot and listen to prayers and readings and watch the kids walk up and down holding candles. It was very interesting and well done. Then at the correct time, I had to join Belvan and go take commumion, rather he did, and the go back to my seat.
This took about 2 hours and after we had our free lunch and gifts for Belvan we hot footed it out of there.

The best thing about the service apart from the actual pomp and ceremony was the choit. I forgot how good a church choir could be and they were really good. Well they were excellent through out except when it came to 'All things bright and beautiful' which was not sang with gusto and the fun that I remember rather it was more 'lounge' style and very chilled. I did not like that.

Will I be back ? Well probably but not for me, I am not really 'into' all that but to support and enjoy the spectacle, thats OK but why oh why is it so so early.....?

Here are some links

http://sanfransis.blogspot.com/
Posted by Unknown No comments:

I am not really a movie buff not because I don't like watching movies but I don't really have the time for them, what with looking after my son on the weekend, it makes it beyond difficult. So with the weekend off and the 2 days that followed it, I was given the chance to chill and relax with both spending time with and away from my normal day to day stuff. Jeremy still went to his grans.

Sunday was spent at Gandaria City with my family celebrating Belvans birthday. This involved buying shopping and eating and watching Maleficent. For fairy tale movies made by Disney, count me out. For one starring Angelina Jolie and not a cartoon then OK why not. I was not left disappointed. While the movie itself was pretty lacklustre, Angelina seemed to shine and made the movie worth watching so that was good. 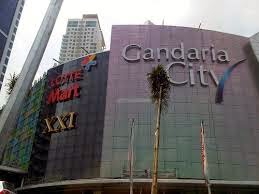 Gandaria City has an IMAX which one day I will venture into but 2d is just as fun.

Monday I spent with my wife as she managed to get the day off as well. Mainly because it was my birthday and so it being a Monday we went to Grand Indonesia and once past the coffee and breakfast stage went to the 8th floor or somewhere to the Blitzmegaplex to buy tickets for Edge of Tomorrow. It being Monday again meant cheap tickets (40,000 each) and the ability to sit anywhere due to the lack of movie goers at 11am in the morning.

The movie was in 3d and to be honest it was not worth the extra cash because the effects were limited but still a great movie where Tom Cruise again does not die completely. Just a lot. Silly but fun and with only 4 people in the entire cinema, a good time to watch it.

After the movie, we ate at Pizza Express and had a few cold ones before moving to Kuninghan City to get some shopping and buy some cakes to celebrate the day.

Gin in the evening finished the day off nicely and it was nice to spend the whole day with the wife without interruption and then the evening with Jeremy.

I had big plans for an adventure through Jakarta on Tuesday but once I had got up out of bed and cleaned the house, all I could manage was a trip to Burger King for lunch before coming back home and watching TV in the afternoon. Another thing I have not done for such a long time. Once the torrential rain had stopped I picked Jeremy up from his grans around 4 and then until 8 spent the time reading books to him (toodle waddle and others) and playing with him until he was too sleepy to move.

We have changed our room around so that he now sleeps on his own materess and has half the room for him so he can play and roll and it has made him very happy and he is more than comfortable sleeping on his own because he knows we are not far away.

So a short break from things was what was needed and knowing everything was in good hands at work it was made more enjoyable too.

I have been on Facebook since April 2007 and it has been a good way to communicate with friends and family since being in Indonesia, however I have been using it less and less and have finally deactivated my account for the time being. 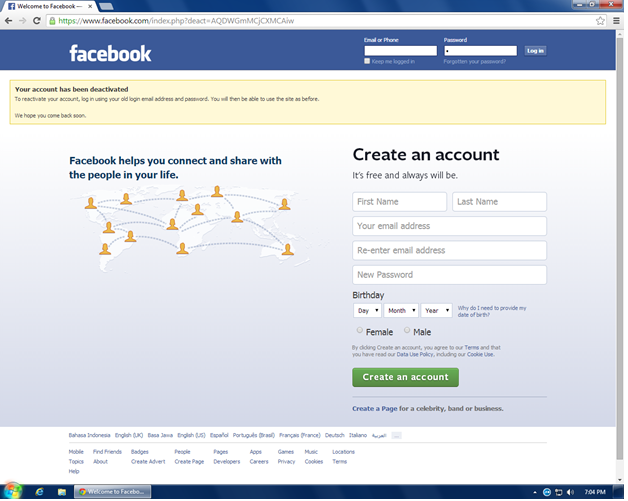 Its been off the my phone for a while and to be honest I have not missed it and I am sure that will continue.

I still use Twitter, Instagram, Gmail and G+, so I can be reached through Whatsapp or BBM should you feel that it is necessary to do so and if you do, great.

I contactable through my blog as well.

After 4 long weeks of washing my new bike, dusting my new bike and worrying if I could actually ride the thing, the STNK arrived, meaning that it had been registered with the police and could now be ridden in the streets. The STNK arrived, not the licence plates. The licence plates are not available from the department that manages this and so I was no better off.
Thankfully and happily my brother in law took the bike and went and got some 'fake' or temporary plates made so I can ride and then he took his Mio back.
The difference between the offical plates and the copies is that the offical plates have a police sign or badge pressed into the metal whereas the others don't. Not caring about that, I have now plates. 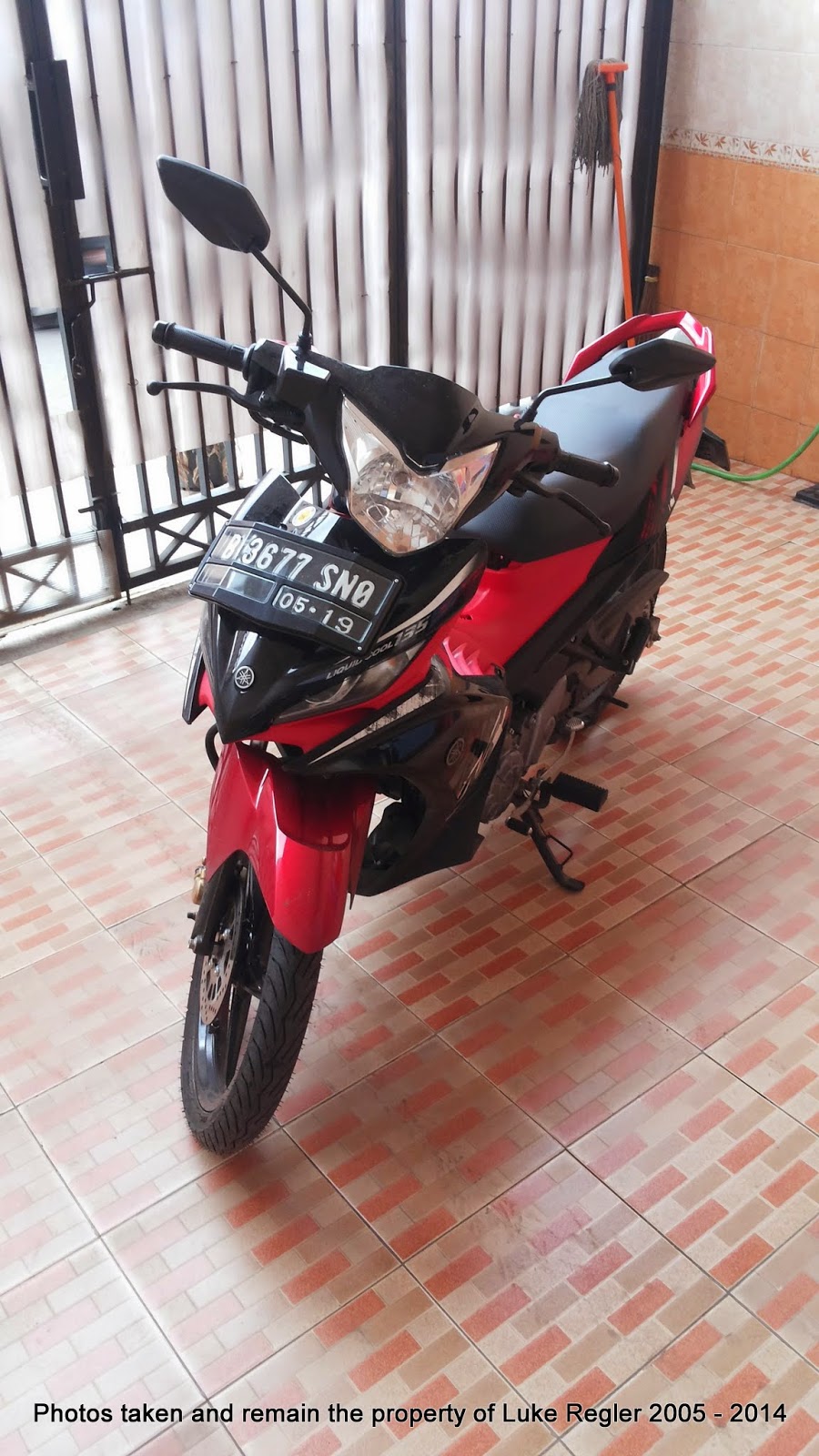 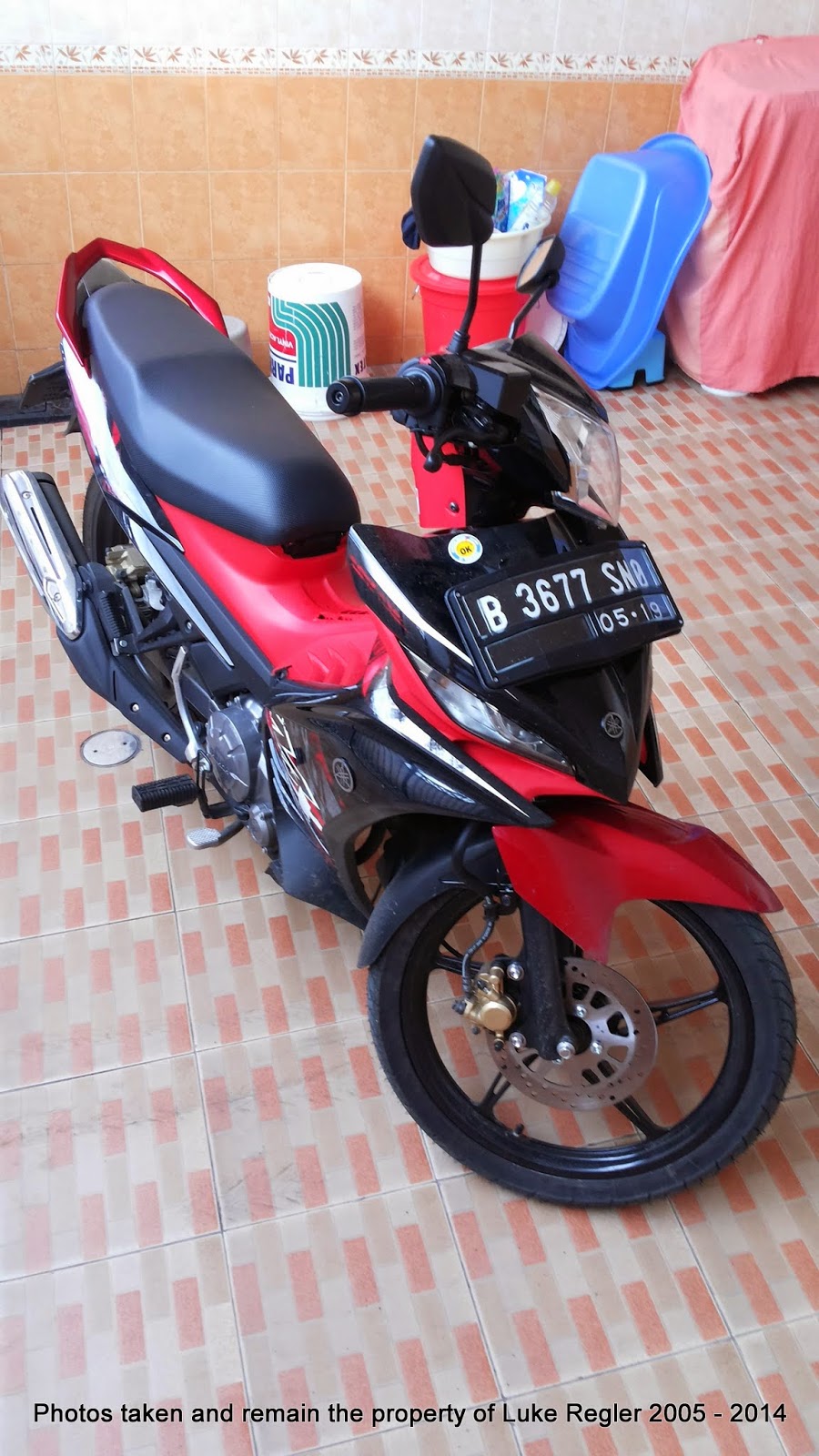 So, now I am free to ride around the city on my new bike and whilst I use the bike really only to get to work and back the fact that I have to use gears and think and can accelerate past things is making me like riding to work again. The gears are getting smashed and crunched but 9/10 I have managed to get it right. I am not stalling it in traffic and whilst 2nd gear is wierd I have almost sorted that out.

I have yet to push it over 80 despite knowing that there is room in 5th to get over 100 with ease but once I have had it serviced and checked over and I find a straight well maintained road, maybe I will see....

I had considered getting a second bike such as a Mio for short trips and quick trips out and about to the shops but I think I will put that idea on ice for a while and think about whether that is really what I want now I have the new MX.
Posted by Unknown No comments: