My wife has some new trainers for the gym as the old ones fell apart and needed replacing. We bought them on Saturday because she was off to the gym on Monday.

So on the way home from the store I was told that I had to go running with her on Sunday morning. Running and me really don't get on because I am unfit, my hip hurts if I run too long and I don't like running, however I am happy to go walking for as long as possible. Being English I like walking and so I agreed.

Sunday in Jakarta is Car free day, which means that one of the busiest roads through the city from Central Jakarta to South Jakarta is closed to cars from 6am to 11am. The only forms of transport allowed on this road during this time are Transjakarta buses, horse and carts, roller blades, push bikes and feet.

We went to Thamrin which is near the start of it all around 7am and walked down to the fountains outside of Grand Indonesia with hundreds of others. While Yovita when running, I stood and watched everyone go by, getting hassled by people for photos and money and things. Then we wandered off to Mcdonalds for breakfast before walking around again. This time the road was full of people and so we did not go too far.

However the morning was nice as it not too hot (it was 8am when we left), around 25 degrees and the traffic in the streets around was still light and so we headed off to the local supermarket for shopping.

Once home, Jeremy went to play withh is gran and I went back to bed. A good Sunday indeed. I think I am going back this weekend, I dont know or we will go to the stadium and then somewhere else.

Oh yes, I also saw a man dressed as a chicken.

Not the start to the year I needed, being sick for 2 weeks, not eating or sleeping well and still not right. Something dodgy was eaten and its not been good for me. But everything continues.

I have just completed another year of Indonesia and now I embark on my 9th year here. I  left merry ole England in 2007. I returned in 2007 and 2010 and thats been it. I guess I do miss the place and with a teacher there over Christmas just gone, felt a bit more homesick than normal, but then when I read the news and see the weather reports and the happy status updates that seem to never appear on Facebook, I am still more than glad than ever that I am still here. My new contract carries me into my tenth year away from England and so at some point this year, I can start to celebrate the end of the old and the beginning of the new. 9 years does not really seem that long but it is. So many things have happened and everything has changed but life outside of England is still amazing, if not the same but with the weather!!

As normal I decided to carry on working and did not rest between contracts. I never moved house due to the lack of houses available and I paid the rent for another year so thats that. I did achieve all the results at work and hit all the targets for the first time ever and that has made me very happy and shows what we can do with the right people. However, moving into 2015 the game is afoot as the targets and challenges have become harder and the challenge greater, all of which sounds like fun.

I also waved goodbye to my old Samsung Galaxy tab which I seem to have had forever and bought a new shiny Tab which is slightly smaller but super fast and fun to have. Jeremy now seems to have commandeered it and so when possible I spend some time a day playing Lego Duplo Trains and Fisher Price games on it and the way he is learning to play the games is astonishing because he is picking up the routines and movements to do things. The time he spend on the tab is limited to around 80 minutes a day because I think it is more important he does everything else and plays and explores and covers the world in ink and crayon, reads books and runs about. However the skills he develops can only aid him in the future and it is helping eye and hand coordination and also making sounds and identifying things.

Speaking of eyes, I took an eye test. I have had some headached and a little bit blurry eyesight now and again probably due to reading a lot on my tab and then switching to me phone which is small and my eyes are complaining. Apparently I am +1 which meants that I need to have some reading glasses. Clearly a sign of age. Glasses first and then buying some comfy cardigans in Next so that the  image of the kindly old teacher will come to fruition in time!! But I will have to think of getting some glasses soon. Interesingly you can go to any Glass store or Optics and have an eye test for free.

Other things which have happened recently include the non arrival of Christmas cards in England, which posted weeks before Christmas have failed to materialise and that has annoyed me. I have sent them but who knows where they are.

The price of fuel has fallen again which is good and the price is less than 40p a litre at the moment but the taxis have not dropped their prices but instead all are the same price per km now so there is no difference between them. Blue Bird interestingly though seems to have taken on a whole army of new drivers, all of which are unable to get the house, get to the big malls, know how to go from here to there without apologising and apart for that being annoying, waiting for taxis is a pain especially when they keep calling the house to ask where we are....

So to cheer us up, some happy snaps of Jeremy. 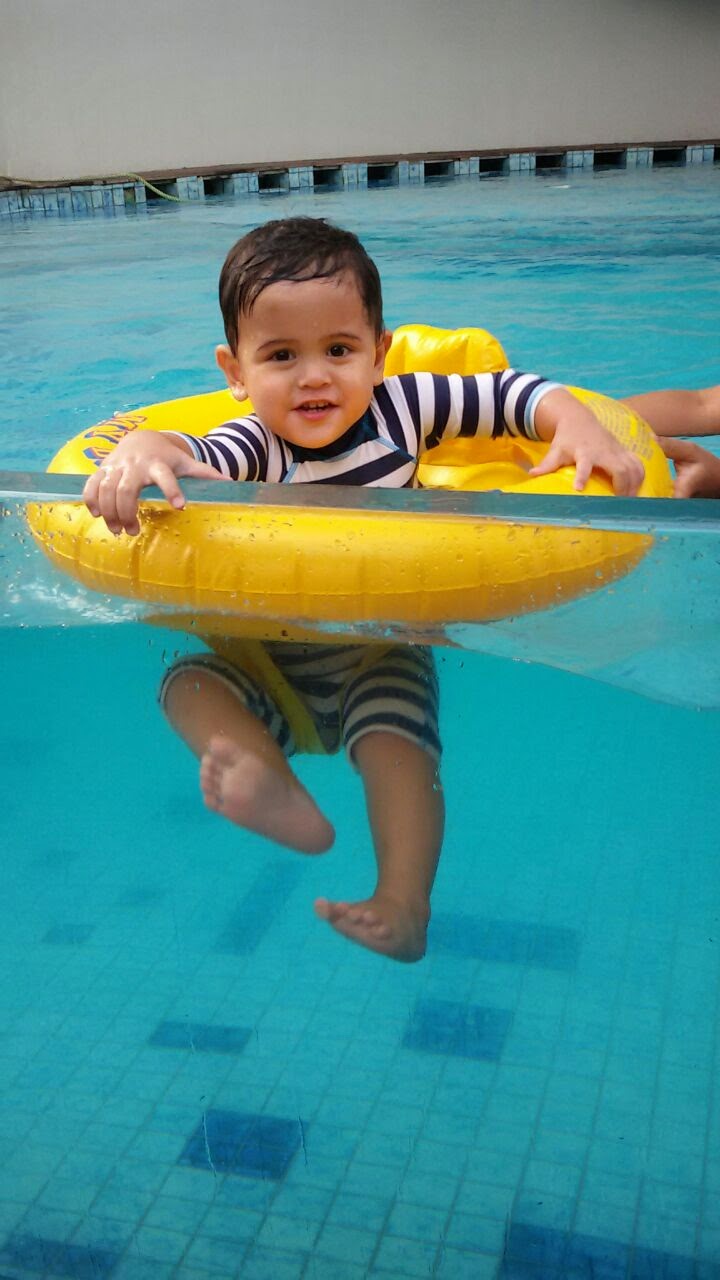 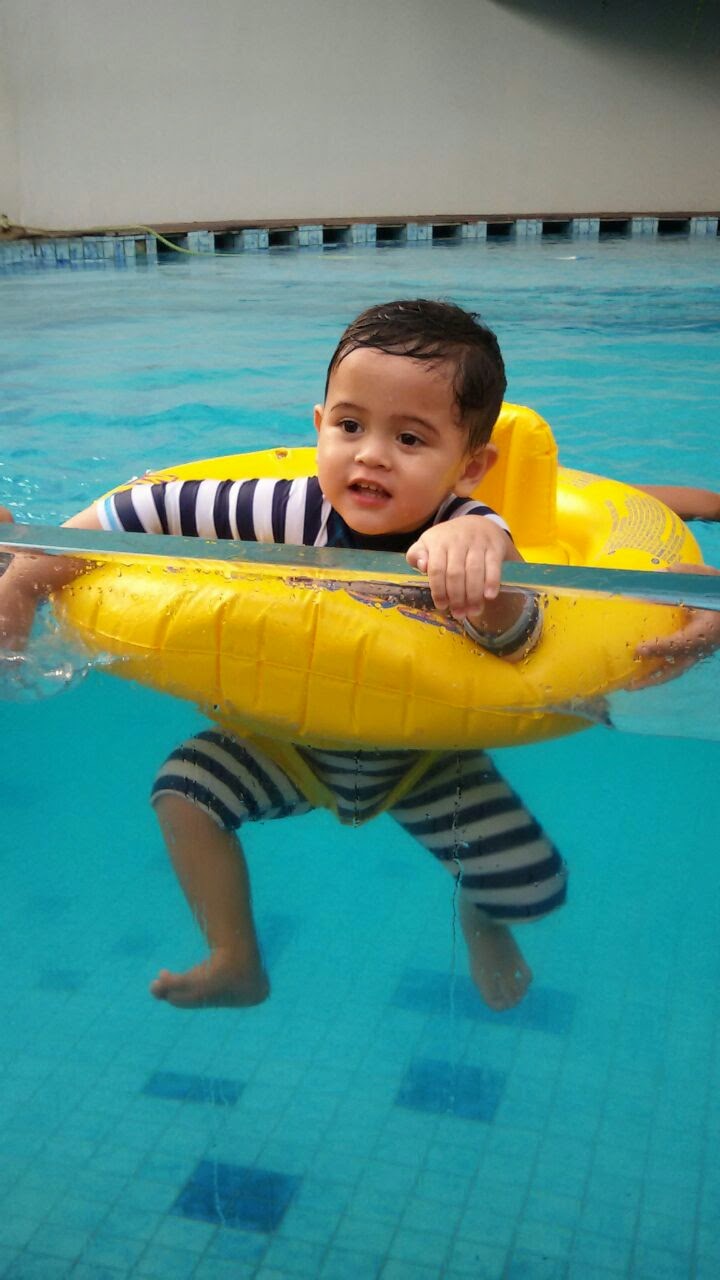 Well 2014 has gone. It took with it lots more memories and a whole year of watching Jeremy develop and grow and become a little boy with his own ideas and imagination. It took a lot my sleep as well. It also took with it seeing my mum and auntie in Bali and their reaction to seeing Jeremy for the first time. 2014 was an emotional year.
But its gone. And in its place a whole year of who knows what will happen. I like that.

To wave goodbye and say hello to the 2014 and 2015 we went back to the Batavia Apartments for a few nights, so we could enjoy hotel living and enjoy views of the city and have a small vacation away from the house. If we could have gone to Bali or Lombok we would have, but Yovita had to work and the cost for 4 was too much. The housekeeper had also decided to go back to her home town so that put extra pressure and strain on us but it was OK.

The apartment was nice, however we were unable to swim due to the rain and the water was too cold for Jeremy, but he seemed happy enough playing with his toys and watching TV. Yovita had to work so it left me to amuse him all day and that was fun. I got to watch the rain for the day which was fun when you are higher up.

Jeremy decided to wake up at 10pm and fall back to sleep at 11.30pm on NYE so any chance of drinking the new year in faded fast as he was not sleepy and it took both of us to get him back to sleep and then all that was left was to watching the increasingly large amount of fireworks around us light up the sky, wish each other Happy new year, phone my parents and then get to sleep before Jeremy was awake again.

Getting back home, the usual stuff continues to happen. We went shopping in Carrefour and to my digust the place was empty of everything we needed, which meant we had to go back to another store to shop again. That was annoying. The price of fuel dropped though which made up for it and Shell V power is under 10,000 idr at the moment and thats great news. The water stopped coming out the taps which meant we needed to find a plumber. All the taps it seemed were full of green algae again from where they had not been used and so that all needed sorting out. The price of electricty rose as well and so I get even less for 100k that before, however to make things end on a happy note, our housekeeper came back from her trip which delighted us all. So its not all bad.

I'm now back at work and settling in again. The early mornings start next week so its long days ahead until May and back to daily fights with the traffic. But its a new year and lots to look forward I sure.

Its a bit late but Happy New Year to you. I hope 2015 is full of laughter, happiness and good health for you all.