So the time finally came and after 40 years I am now a married man, married to my best friend and partner in life,  Yovita.

We had planned the event for just over 18 months and so the nerves pretty much had gone by the time we were on Bali. My parents had flown to Bali from England to ensure I married and for a holiday in Indonesia. It had been 2 years since we last met so I was really happy that they attended.
The wedding was on Saturday and on the Thursday we met with our Wedding Planner at the wedding venue to go over the ceremony and bits and pieces.

The wedding was held at the Patra, Tuban in Bali, which is right next to the airport and it is simply a beautiful place to get married. The management ensured that we had every thing we needed and they provided us with a room to get ready in and a separate room for the reception after. 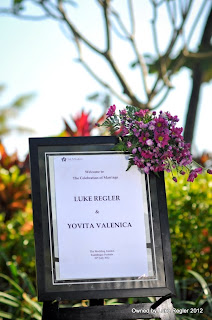 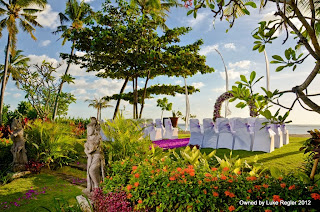 The weather was perfect with the sun setting behind us as we committed to each other and there was a slight breeze but it was a truly perfect evening in every way. The setting was in the gardens of the hotel with us married under an arch. We had a religious and civil ceremony with plenty of photos thrown in. The service itself lasted around 40 minutes all in and the photos probably over an hour.


I had a friend from work and his wife act as witnesses to the signing of the wedding. My manager and her manager also attended so I was very honoured to have them in attendance. Sadly my brother and his family could not attend but the cost of flying out here is pretty high and with kids and work and the Olympics in England they decided better to stay in England. 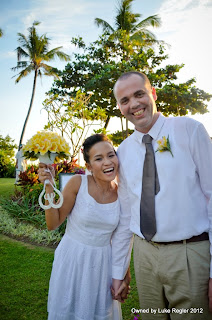 Once the photos were out of the way, and there were a lot of photos, over 630 were taken through the ceremony including the make up bit to the final throwing of the bouquet, we went to eat. A few speeches were given and then everyone tucked into an open buffet and ate as much as they could.

The cake was cut and it was a good cake and after handing it out to everyone, I managed to grab some myself. By 9pm most people were moving on and going home. The wedding whilst small in attendees and short in time was an amazing experience for us all. Getting married in front of friends and family, in the open air in perfect conditions with Balinese girls throwing petals around, traditional music in the background through out and the chance to marry the one who completes me, was truly a magical day. 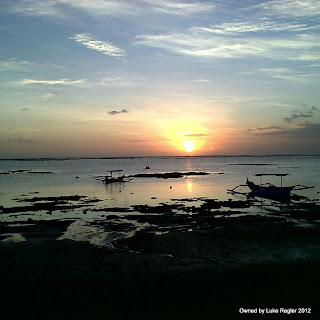 The sunset was amazing, and I wish we could have ate on the beach and watched it go down.

After the wedding was over, we nipped back to the hotel and then joined our friends for cocktails and beers in Kuta till the early hours of the morning before eating the traditional Burger King and Fries before passing out until morning.

Our wedding planner was awesome. Sheer Brilliance on his side as the wedding went smoothly with no problems or issues and the amount of support we had from him through the planning and organising was staggering. I would recommend him to anyone thinking of getting wed in Bali. His professionalism and kindness throughout was just great.

He also came to the Airport on Tuesday as we headed off back to Jakarta to hand us our photos and album, again a really nice touch and gesture.

My parents are in their 70s and are a spritely pair. They decided they would come and attend my wedding which was held in July in Bali.
This news of course, was the best news to hear and I was delighted that they would come. So they set off for Bali from Frome in England and took on the massive journey half way across the world to see me.

The flight from London to Singapore is around 13 hours and whilst my father slept through most of it, my mother was awake. There was a fair bit of turbulence through the flight so hot coffee was not available nor was brandy. However despite this, they were well fed and watered throughout.

On getting to Singapore, they asked for assistance as they only had 2 hours before flying into Bali. Singapore Airlines did a great job. For those that have been to Changi Airport in Singapore you will know understand how big and vast it is and so for a new comer it must be pretty disorientating. They were put on a golf cart and rushed through the airport with the siren going and light flashing which I am sure they enjoyed.

The flight from Singapore to Bali is not too long around 3 hours and it was a bit bumpy and my parents were surprised by the amount of food again they received.

Getting into Bali Airport and the infamous waiting times at Immigration there, again they asked for assistance to help them through the airport. Someone came and took their passports and money and sorted the visas out so they did not have to queue and then got their luggage and helped them to the driver who was there to take them to their hotel. They were at there hotel in less than an hour after landing which considering the state of Bali Airport is fantastic.

Hearing all this was great news. It does make a change from the less than encouraging stories you hear about Indonesia and Bali immigration and I thought I would share. So well done Singapore Airlines (although I did not really expect anything less) and well done Bali Airport.

My parents flew back on Friday. They had an hour to spare in Changi before the long flight home to London and the chaos that started the Olympics!

I have yet to hear from them, but I suspect everything went very well and they are home moaning about the heat in Bali and the heat in England and the amount of weeds in their Garden. 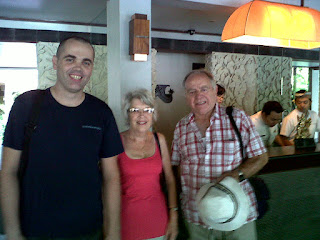 My first day with Mum and Dad the morning after they arrived.

This time next week I will be in Bali with my parents and counting the last few days until I become a married man. I have not been blogging recently due to not having internet access or a laptop any more following the robbery and I have not had time to go anywhere else and also very hectic with work and things.

So I think we are pretty much ready now, all the monies have been paid, hotels and flights booked and messages and instructions confirmed.
Air Asia of course keep moving my flight about but thats to be expected. I have visited several malls, jewellers, many shoe shops, many clothing stores, sent numerous emails and have chased up everything connected to the wedding.

The cost seems to be constantly moving and the added bits and pieces never seem to stop, but they will in 10 days time.

Its been a mighty long journey to get to this point and now all is left is to get through the week and then get to  Bali. Its been 2 years since I saw my parents last and I very happy and excited to see them especially as it will be on my 'home turf' so to speak and I am confident that they will enjoy and be delighted by Bali and all it has to offer. I shall be careful not to stick father in the front passenger seat though, as the traffic disorganisation will be too much for him. I am sure the heat, flies, mosquitoes and endless motorbikes will also be a challenge but not too much of a challenge.