Start of the rainy season

I could be wrong and often am but I do believe the rainy season is beginning albeit slowly. However over the past couple of weeks there has been some big storms around the city, flooding in areas despite the drains and river being cleaned up and emptied of rubbish and muck and silt.

Friday morning was a great example of a near miss because as I headed into Tomang, I could see that the clouds were building and it was getting it windy so by the time I arrived in Puri, it was dark and the clouds were gathered ready to burst. And they did for over an hour. In some parts of the city there was the inevitable and usual chaos because of it. Still the storm looked in impressive from inside the building.

The average temperature at the moment here is around 32 during the day though I suspect days like today are more at 38. The evenings and early mornings seem to cool down and with the wind in the right direction, you can feel the coolness and the temperature reaches around 26 which is er, almost cold!!!
There is a sign near Tebet which tells the temperature and it said 38 today. Where I teach in St.Ursula, the temperature is often 34 degrees outside. When the storms come the temperature drops a little to say 29 and then as soon as the storm passes it rises again.

The storms on Friday were so strong that they knocked out the internet for our school and probably countless other places. This is normal. It rains, the internet goes down but it appears that there has been some serious damage this time because the internet was still down Saturday and I have a nagging feeling it will be the same for Monday. I hope I am wrong.

As I am sat writing this the wind has picked up and the clouds are gathering slowly to the east and west and the blue sky is disappearing. By dusk I feel a storm will be here but as long as it has passed and all dried up before 5.30am (when I leave for teaching tomorrow) let it come and let it pour. My house will not flood even though the road 50 meters either side will.

Once December comes then the rainy season will become more fierce in Jakarta with January being normally the worst month. I will need to buy a new raincoat and trousers before then, just in case. The bike has so far been great in the storms and I suspect it will continue to be so. I hope so. But from experience, every time I choose not to fill the bike with fuel until the last minute I have to ride home in a great storm and torrential rain.

This time six months ago I was lying on a small sofa in one of the rooms in the Angrek ward and YPK Mandiri hospital Jakarta, with Yovita discussing the fact our son, Jeremy was 5 hours old and could almost fit in my hand. (Photos at end of blog).

6 months on and he is just a bundle of energy; alert and observant, always happy noisy and full of happiness. Jeremy has developed and grown so much and it is amazing to watch and see. 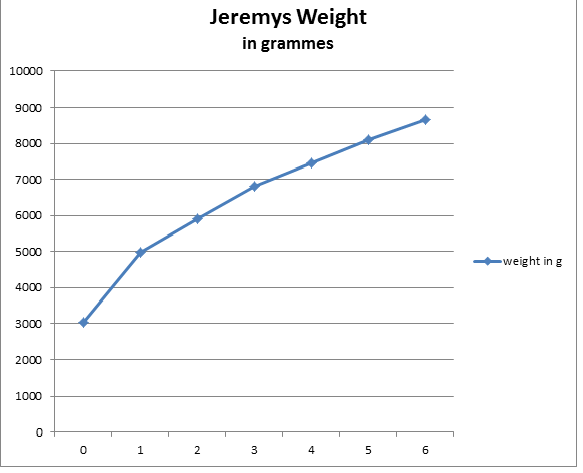 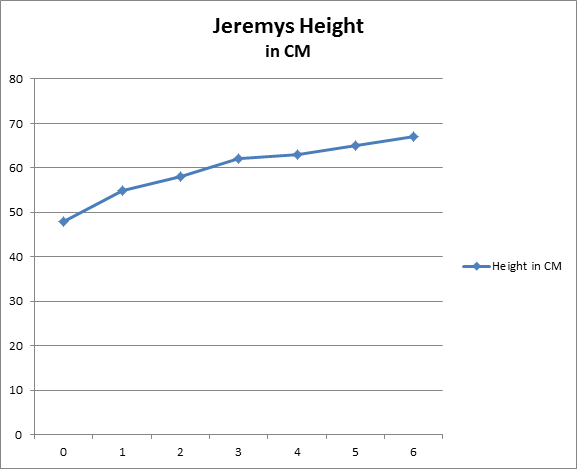 He is getting bigger and taller and the doctors seem happy with his progress.

As for vaccinations, he is still in the process of being jabbed for all. So far he has had the following:

with the measles jab being the last major one at 9 months then a respite of a few months before more come. The offer of the influenza jab is also there but that does not need to be done straight away. The MMR jab is also required and that will be done at 15 months.

Every jab makes him grouchy for the rest of the day and then he sleeps and wakes up the next day like nothing has happened.

Unsurprisingly, Jeremy is cow milk intolerant at the moment which means we are feeding him Hypo Allergenic milk formula. Yovita is no longer producing enough breast milk for him so he has been on formula for the past couple of months. However he is now at the stage where he can eat, Banana and other soft fruit, Baby food in a Jar, Farleys rusks and soft porridge which is great. We have also started him back on normal formula to see if he is now able to drink that. He can also drink juice and also water. Feeding time is always fun and messy and it won't be long until its high chair time. The Farleys rusks however seem to go well with tea and so we are always buying more than we should!!
He has some teeth on their way and they should be here before Christmas as well which will be something new for us all.

For clothes, Jeremy seems to be outside the scale out here in Indonesia. We are now buying by weight rather than age although if we go with age then its currently 9-12 months. Still, saying that everyone brand of clothing we choose is different in size. The clothing from England so far has been awesome and bang on but out here it is more pot luck. Happily there is Mothercare which does have the right size at the wrong price and Marks and Spencers has a limited range. Still he has enough clothes at the moment. Shoes on the other hand are still not something we are using mainly because it is too hot and he does not need them yet.

His motor skills are improving and he is able to grap, pull, scratch, poke, kick, slap, punch, throw, splash, bang, suck his toes, and hands. He can also roll forward, backward, crawl in a zigzag and sit up and remain sat up for short periods of times. We are looking forward to him crawling and learning to sit up on his own and then walking. Plans are already a foot to make the house safe when he has mastered these skills.

Then there is his voice. He can scream with joy/happiness louder than a whole class of students at my school and over a long period of time. He only really screams when he is hungry other than that he is either babbling or screaming. He laughs more and more now and can sit and laugh which of course is infectious. I am currently trying to encourage him to blow raspberries which he can do although seldom. When he speaks will be a great day.

All that in 6 months. Our lives have been turned upside down with Jeremy and everyday has been a good day. I am lucky enough to spend 3 or more mornings a week with him before work so I can play and spend time with him which is great and then all Sunday is spent with him.

The next 6 months will see even more change and I have no idea what that will look like or how he will continue to grow and develop but I know it will be just as exciting.

Riding with no front lamp or brakes, sort makes you realise its time to get the bike serviced. Getting time to do that is often really hard but it has to be done.

So today on my day off, instead of sleeping in and playing with Jeremy I got up early, service book in hand and rode off to get the bike serviced. The plan to drop it off at the local Yamaha service shop and then go and have breakfast and come back and collect it later.
The local service station was great and well known for its service. However on arrival I find its closed down, gone. Never to reopen.

This is 7.30am on a very busy Friday morning. I really need the bike sorted out and this weekend too. Otherwise I would be worried that the bike will just break down.

Undetered by this I set off south and head to the zoo and then take a left into unknown riding country. I end up at Pejaten and then to Pasar Minggu which is a sprawling mess of a market then into the worst traffic and back toward my house. I spot in the distance a Yamaha service station and so cutting across 3 lanes of grumpy and snarled up traffic I do a U-turn and roll into the place.

Being English and attempting no English I hand the girl behind the service desk a note with a list of things that need fixing. I am number 5. Which is good.

So  I sit with the others and watch as the bikes are taken apart, serviced, put back together and then collected and so on.

My bike seemed to take the longest time to get serviced probably due to the list of things needed doing; new front lamp, brakes, oil, tune, chain needs tightening and the horn does not work always. But the man fixing it 'Ray' seemed to do all this with ease.

180,000 idr later or just over 12 English pounds its all back together and well I rode it home and its all nice again.

Having a Friday off means I have a little time for me which is always welcome. Upon getting back to drop the bike off, I can hear Jeremy screaming. Not in pain or in hunger but in happiness as he is playing with our housekeeper. This screaming makes the head spin.... 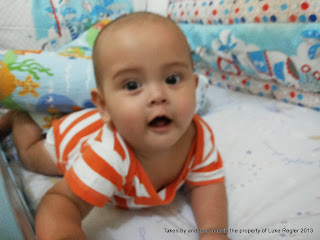 Then off to meet Yovita for a quick lunch in the city and now its a few beers in a bar (Barley and Hops, Epicentrum) in the city playing 80's soft rock and drinking buy one get one Heineken.

First time for a very long time I have been able to do this and its good.
Posted by Unknown No comments: