A week in August

Its been one of those weeks again I think. There has been so much happening at home and with work that I often wonder where all the times goes and the assumption that all is well and easy as an expat goes very simply 'out the window'.

After work on Saturday, I endeavoured to get home through terrible traffic. The traffic is never good but this Saturday it seemed to be worse than normal. Maybe because it was Independence day weekend, maybe because the major roads in the city are being dug up for the new MRT or maybe it was a just a bad weekend for traffic. Whatever the reason I ended up getting home after 2 hours on the bike in the heat which was not that nice.
Sunday was Independence Day and it is a fun filled day for everyone and everyone here celebrates Indonesias birth as an colonial run nation. This year, Independence day fell outside of ramadhan so everyone was full of life. To my amusement/horror the local head of the street choose outside our house to organise and host all the activities which went on pretty much from 10am to 6pm with a short respite for 2 hours. The break in the games and noise allowed us to get a taxi and go shopping for the week ahead. Getting home we were not so lucky as it seemed every road in and out of the area was closed to the festivities.
The festivities were mainly games for the kids but the mums and dads were roped in as well and from where I was stood (on the balcony) they all seemed to be enjoying it.

I am back at St.Ursula again this year and I am still teaching in Elementary which is great. The kids are fun and the lesson quick but they are draining. Friday saw me covering in another school due to holidays and that was further draining on the energy because when I teach early in the morning, I have to be at the schools by 7.30 so that means pickup at the teachers house at 6.30 so I need to leave my house at 5.30. 5am is now sadly, very easy to wake up to.

Jeremy helps with waking me up. He has a habit of waking early and playing and then after some early morning milk sleeping for another hour before its full on energy until he falls down to sleep. Monday and Tuesday were 2 of those days but on Wednesday he developed breathing problems and would not eat or drink and could not sleep. So all Wednesday night we were trying to help him sleep and us too and I would say 4 hours max was achieved by all so much so that by 5am we were all awake and wandering around the house. 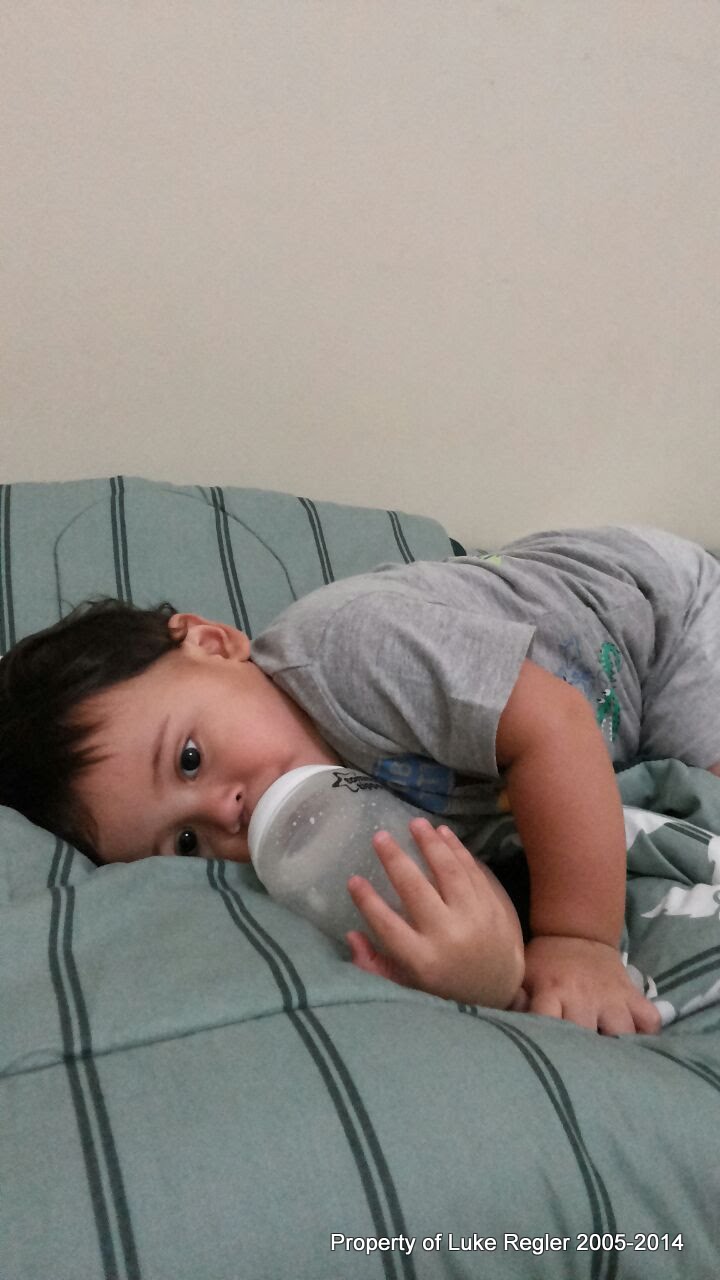 We took Jeremy to hospital where he was diagnosed as having an viral chest infection and a reaction to something which was causing his screaming and breathing. We had to take him to physiotherapy so that he could receive oxygen and other vapours and massage but Jeremy did not want that so we gave up, paid for the sack load of medicine and came home. Then I went to work.

Happily by the time I got home, his breathing was almost normal and he had slept for around 10 hours straight and again now, you would think nothing was wrong. Although the 4x different medicine he has to take every few hours reminds you he is still sick.

Then the milk. As he has had issues with his stomach we were told to put him on lactose free milk. We have cleared out the surrounding area for Enfamil  Lactose free milk and are struggling to find alternatives. But we will and he will be better again. 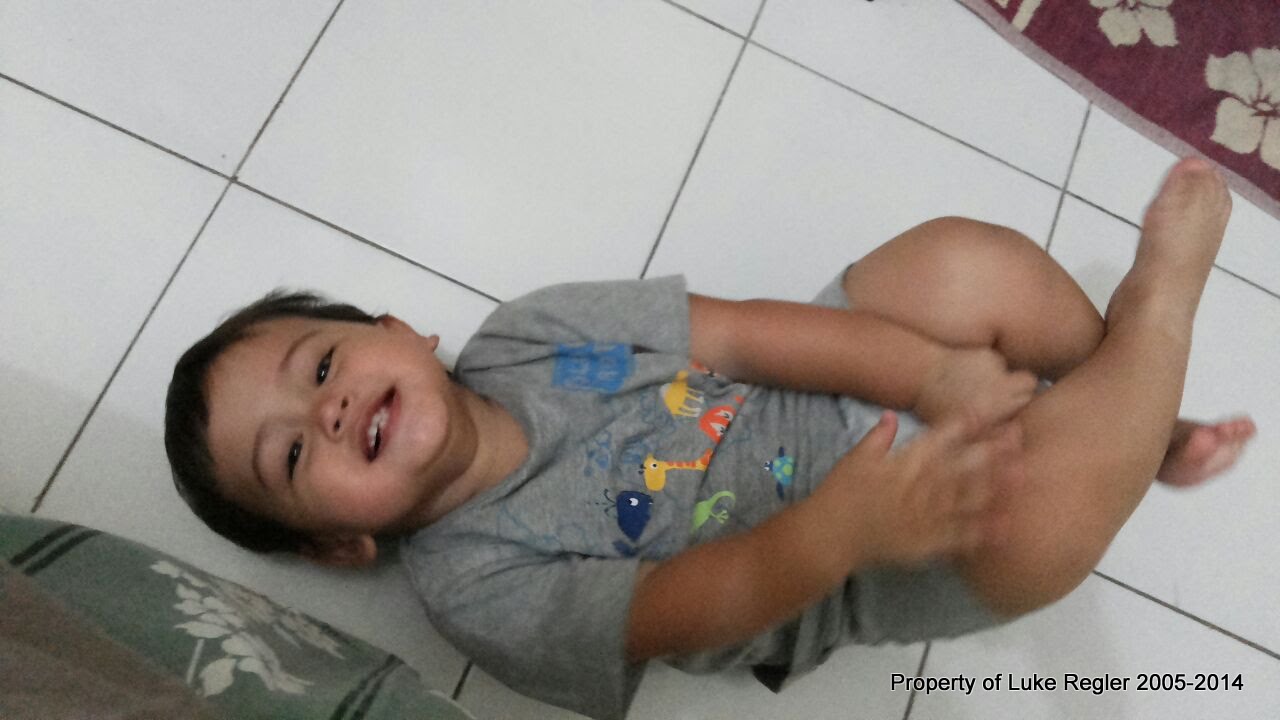 Thursday also saw some riots in the city as the decision about who was going to be the next President was announced following a legal challenge by the person who lost. The city emptied out by 2.30pm and so when I took a taxi home, it only took 30 minutes instead of 80, which was nice.


The rest of the photos can be found here  http://www.thejakartaglobe.com/multimedia/eyewitness/final-stand/

That was my week... what did you do?
Posted by Unknown No comments:

During my week long break we decided to stay in a hotel for a few days to break up the routine and give us a break. With 2 kids hotels become more expensive or the rooms become more cramped and then extra beds are needed and I see no fun in that. Browsing Agoda for a few days we eventually settled on the idea of staying in an apartment rather than a hotel. We had it down to Puri Casablanca or Batavia Apartments both are well located and reasonably priced.
We went with Batavia apartments and for 800k a night we had a 2 bedroom apartment, bed and breakfast and all the spoils of a hotel, which cant be bad.

Our room was on the 12th floor facing west so it had a great view. There are 2 towers at the complex and we were in tower 2. The apartments have a steady stream of Gamya taxis outside and there are plenty of little stores, banks, pharmacies anda pizz hut outside. The nearest mall would probably be Semanggi as the apartments are in Benhil which is next to Sudirman.

The apartment was huge with a modern western kitchen complete with full gas oven and a microwave. Dishes and cutlery and cups etc. A washing machine and space to dry clothes. The bathroom was small but had a bath and shower but there was loads of hot water. The 2 bedrooms both had double beds and all the main rooms had AC. The main seating area was very big and for the money, it was great value.

There is a pool and gym on the fifth floor and so Jeremy had some time and fun splashing about in the water with his mum dad and brother. The views from the poolside were great and with the sun shining made the place a great spot. 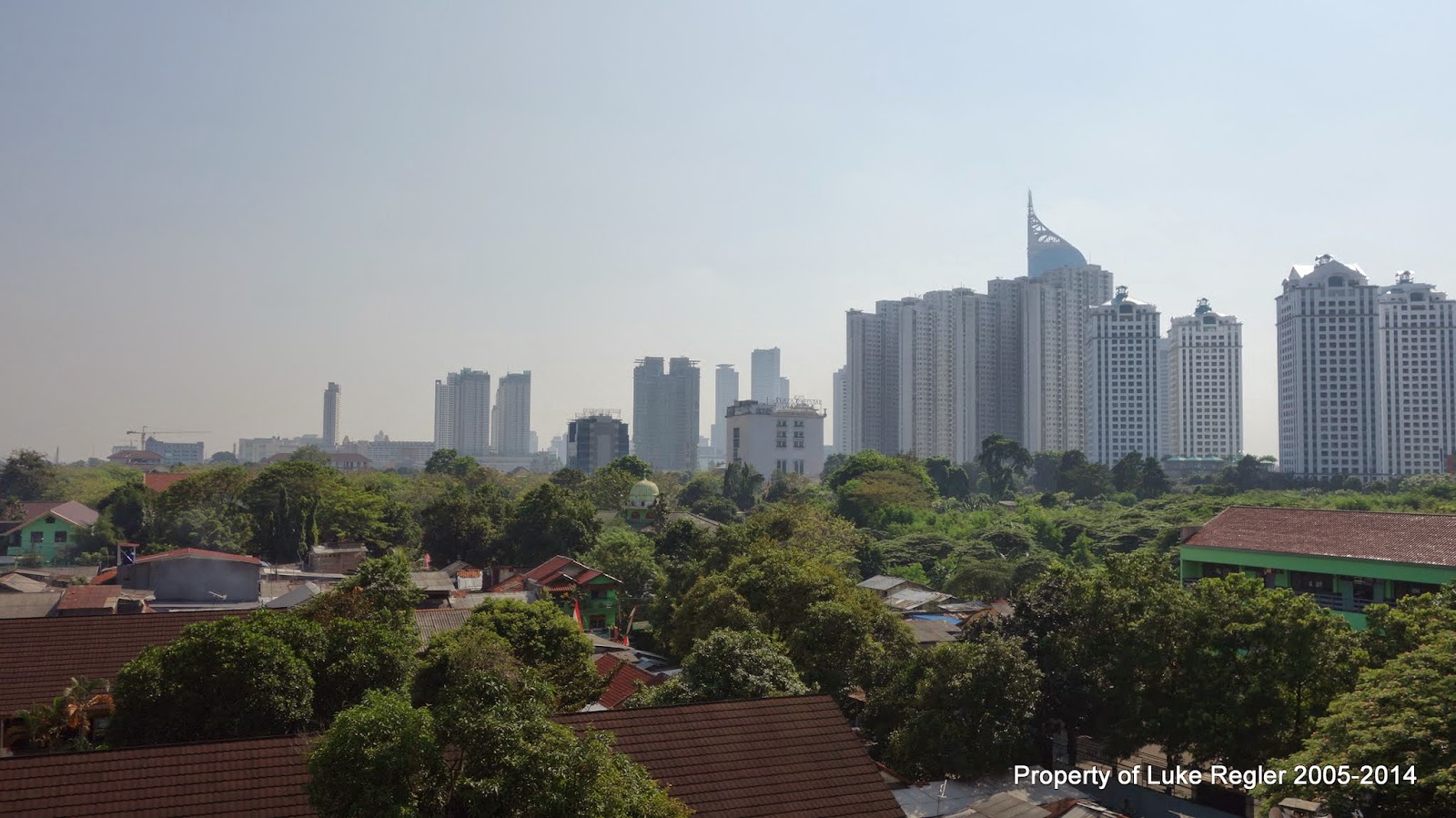 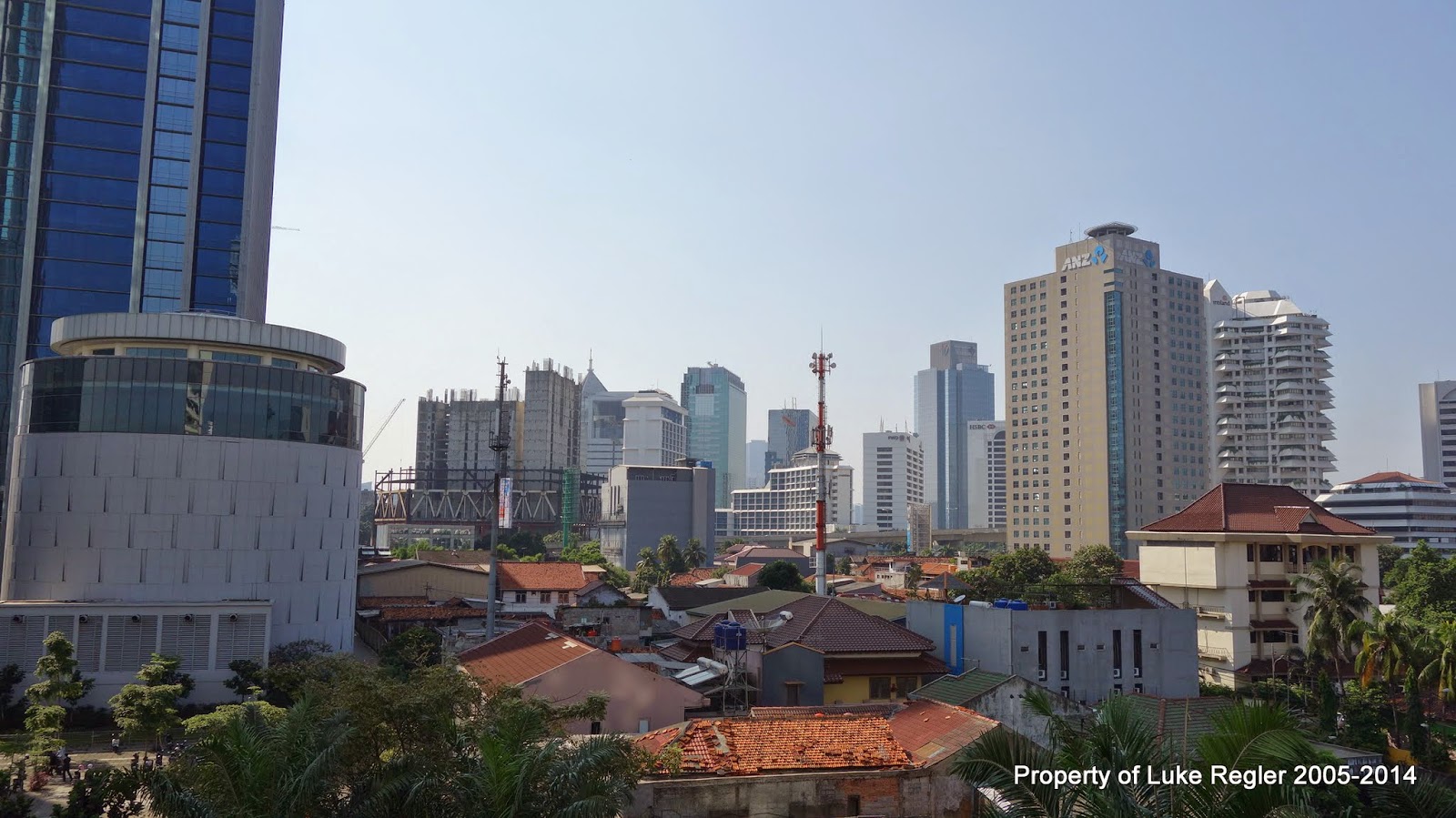 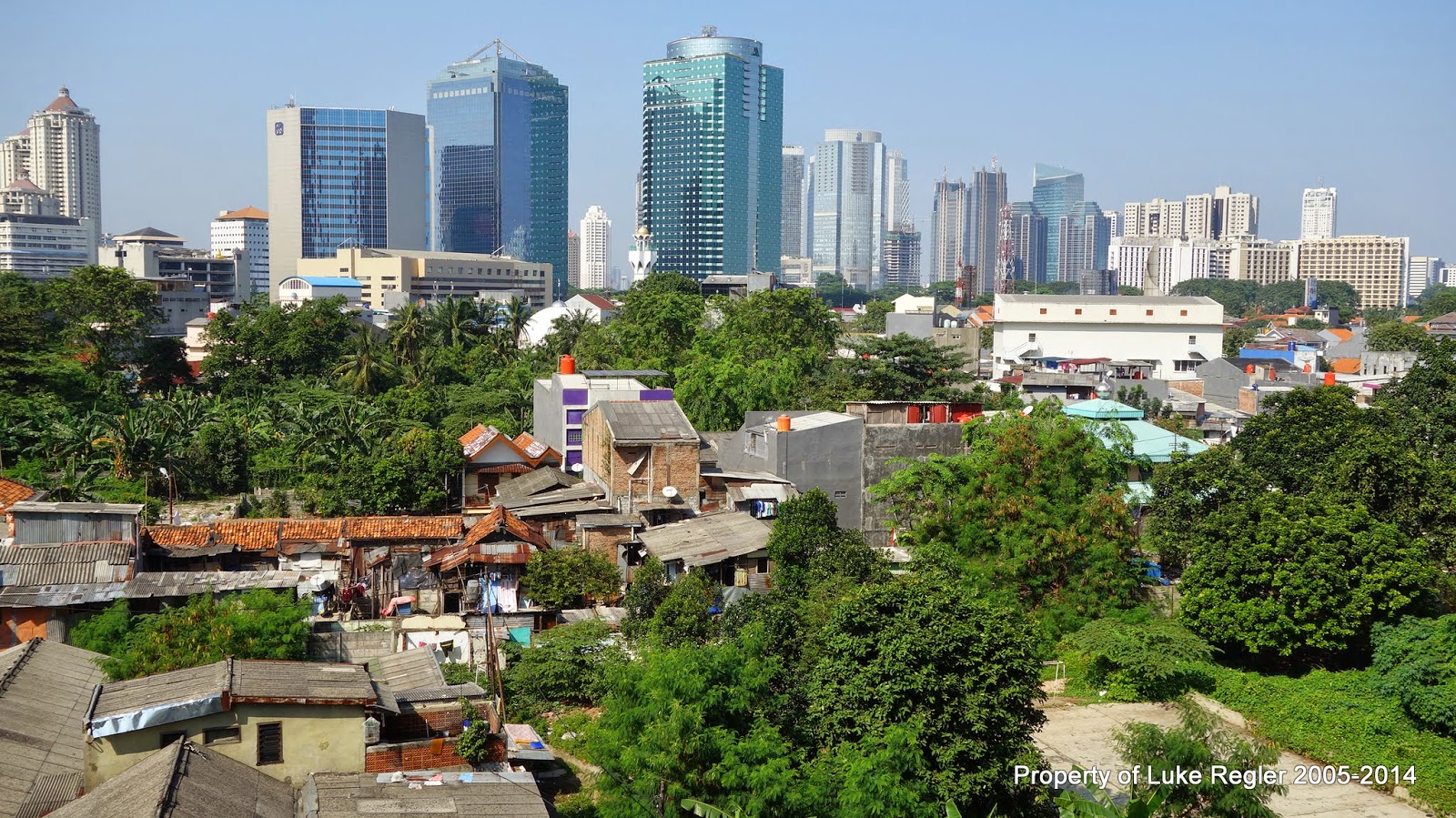 I guess the only draw backs were the lack of breakfast items when we arrived at 8am. Nearly everything had been emptied and the staff seemed very reluctant to refill anything ay all. The TV and cable has 2 movie channels which were apalling and there were no instructions on how to use the cable tv and tv which made a great challenge.

Thats about it really. What did we do? Nothing. Sat about, swam, rested, played, cooked and ate. There was no desire to do anything else really.

We are considering going back for a few days over Christmas. We may.

A link  http://www.bataviaapartments.co.id/
Posted by Unknown No comments:

With a week off through Eid and the end of fasting, I had plenty of time on my hands to do many things. Many things were not really done. I spent the beginning of the week sleeping and eating playing with Jeremy. For the 2 main days of Idul Fitri everything in the city is pretty much shut for half the day, meaning for me on the Monday I did nothing and Tuesday ventured our for fuel and some coffee but not moch more than that.

Before the holiday I had organised with 2 of my teachers a road trip out to Bogor on the the bikes for the day with the aim to go find a waterfall up in the hills over looking Bogor (called Puncak) and then come back.
Sounds easy enough right? Well it was, but only almost.

Setting off at 5am to be at the teachers house at 5.30 was a breeze. The empty pre dawn roads were clear and so it was fun to ride across the city without the danger of a bus or car or bike etc getting in the way. Getting to the teachers house, I then had to wait for 30 mintues for another to come and once he had off we went.

The journey is simple enough from Puri. Follow the road all the way to Pondok Indah and then to Pondok Cabe and then the sign posts to Bogor via a place called Parung and then straight into the heart of the small hilly city of Bogor. The trip again took no more than 90 minutes with some good speeds and non stop riding for most of the ride. Once in Bogor, hunger struck and what better way to sort than out than Mcdonalds breakfast.

From there we headed to the road for Puncak only to be confronted with an endless stream of buses, cars and bikes heading up into the hills. We rode in this for about 40 minutes before turning around, discussing our next move and then heading back down in traffic. Puncak is a place of beauty and there are many places to see and visit, however it is also the main stay resort of almost every single person in Jakarta and so high days, holidays and every other day the chaos to get there is immense.

We rode back into Bogor and then out again on a small side road to find another mountain to go up and hopefully a waterfall or two. The ride out of the city was pleasant but hot and as we rode up into the hills it became very green and very simple but still with many bikes and cars and unpleasant rode to travel on. 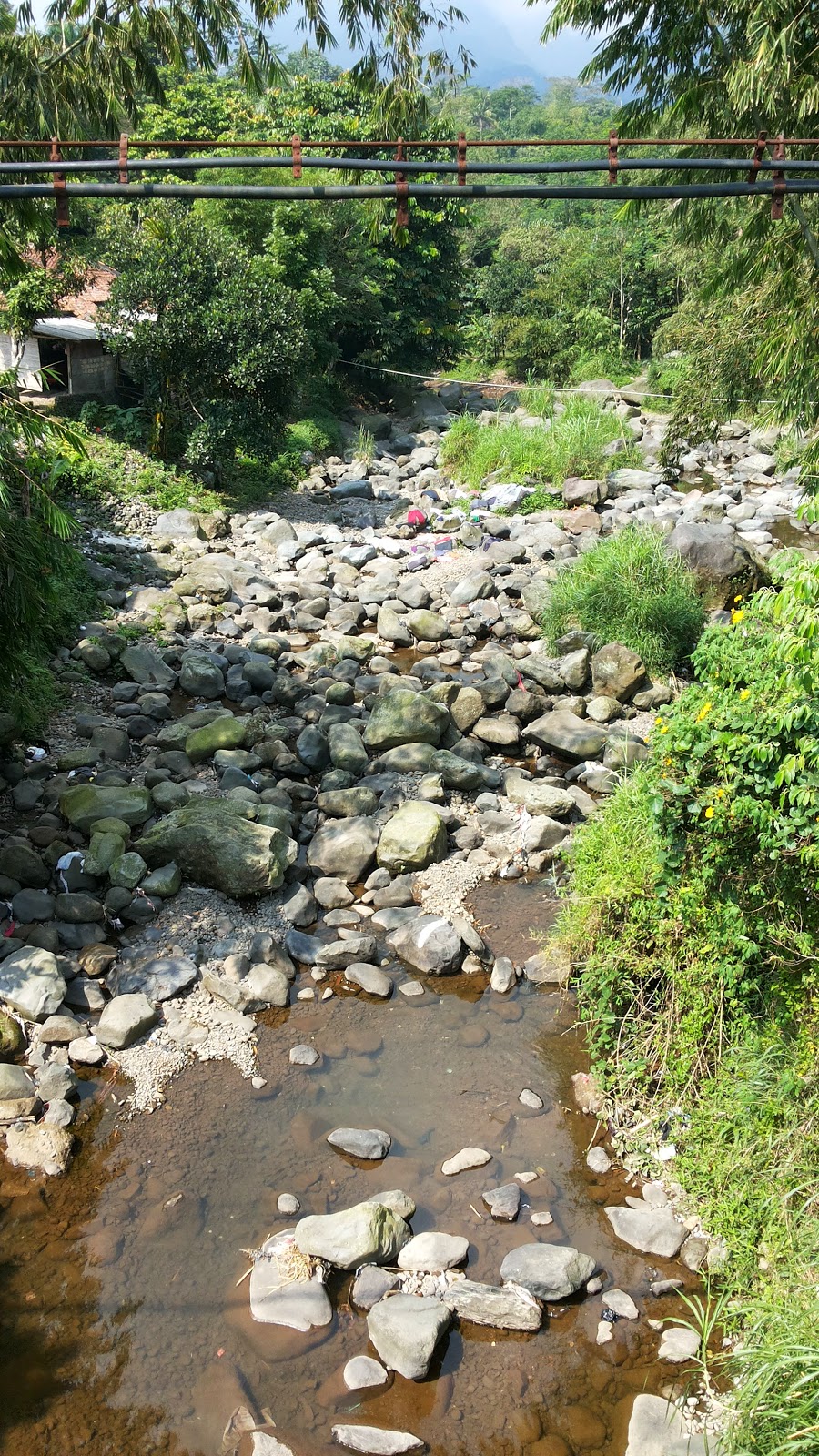 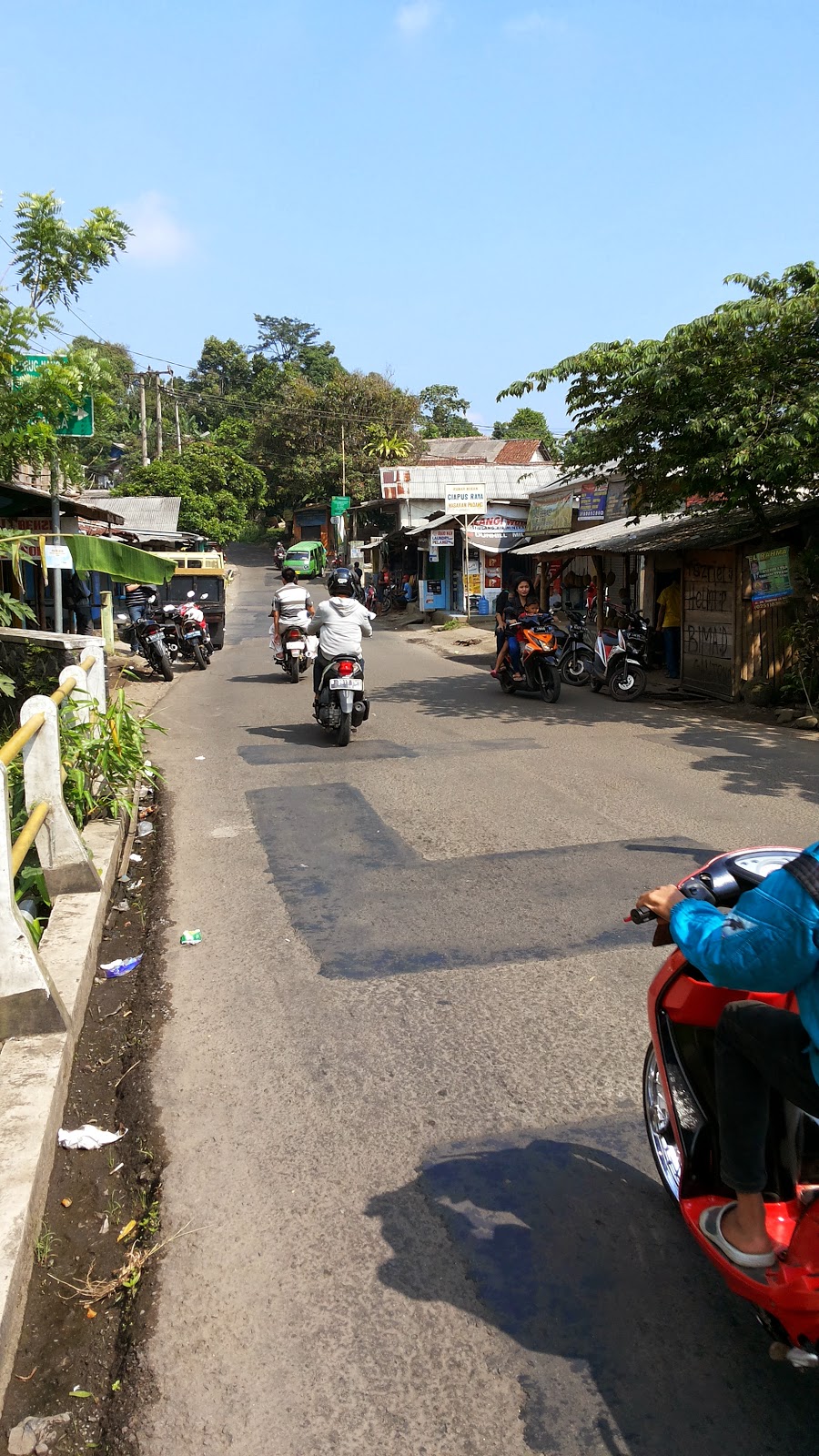 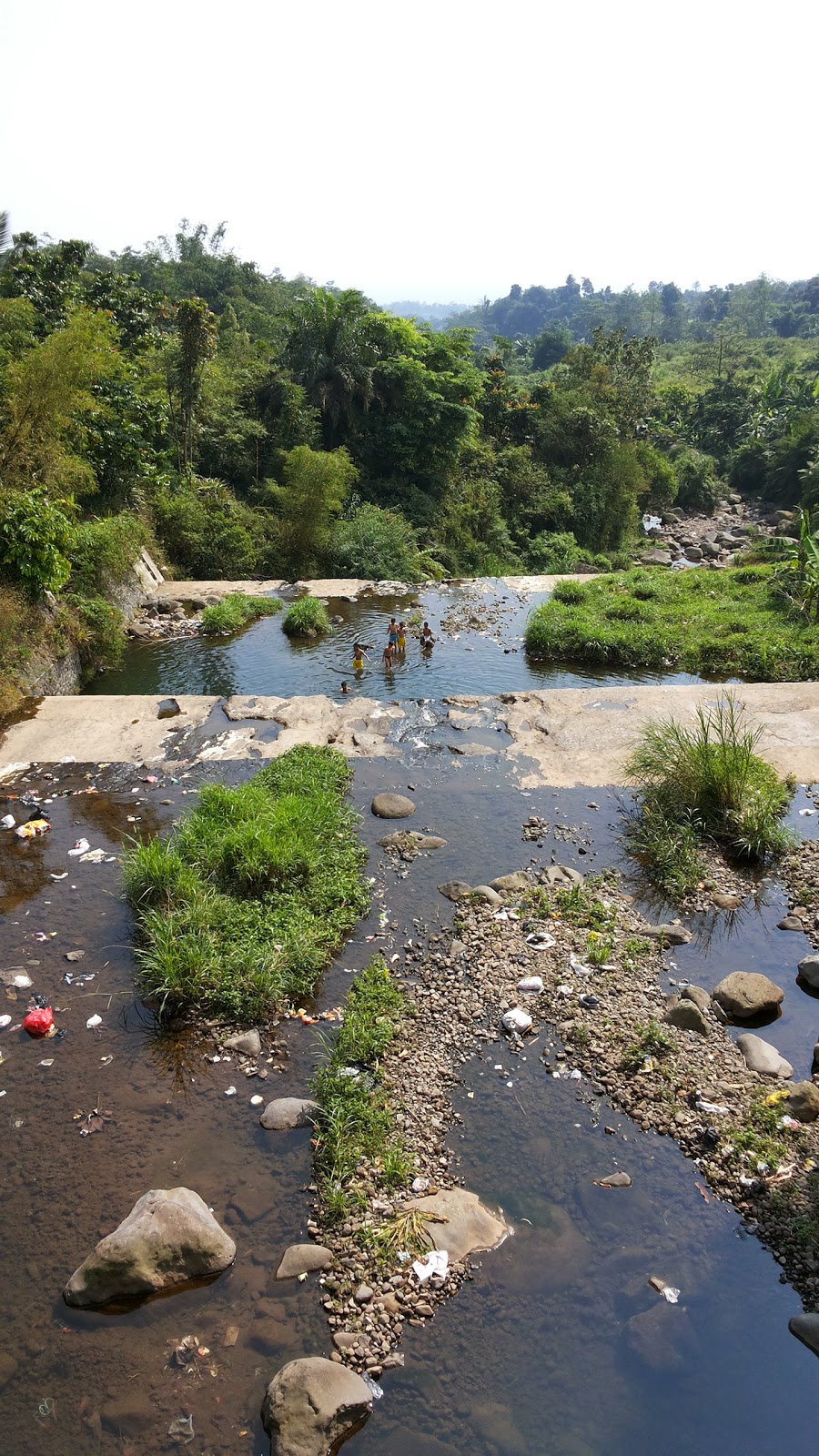 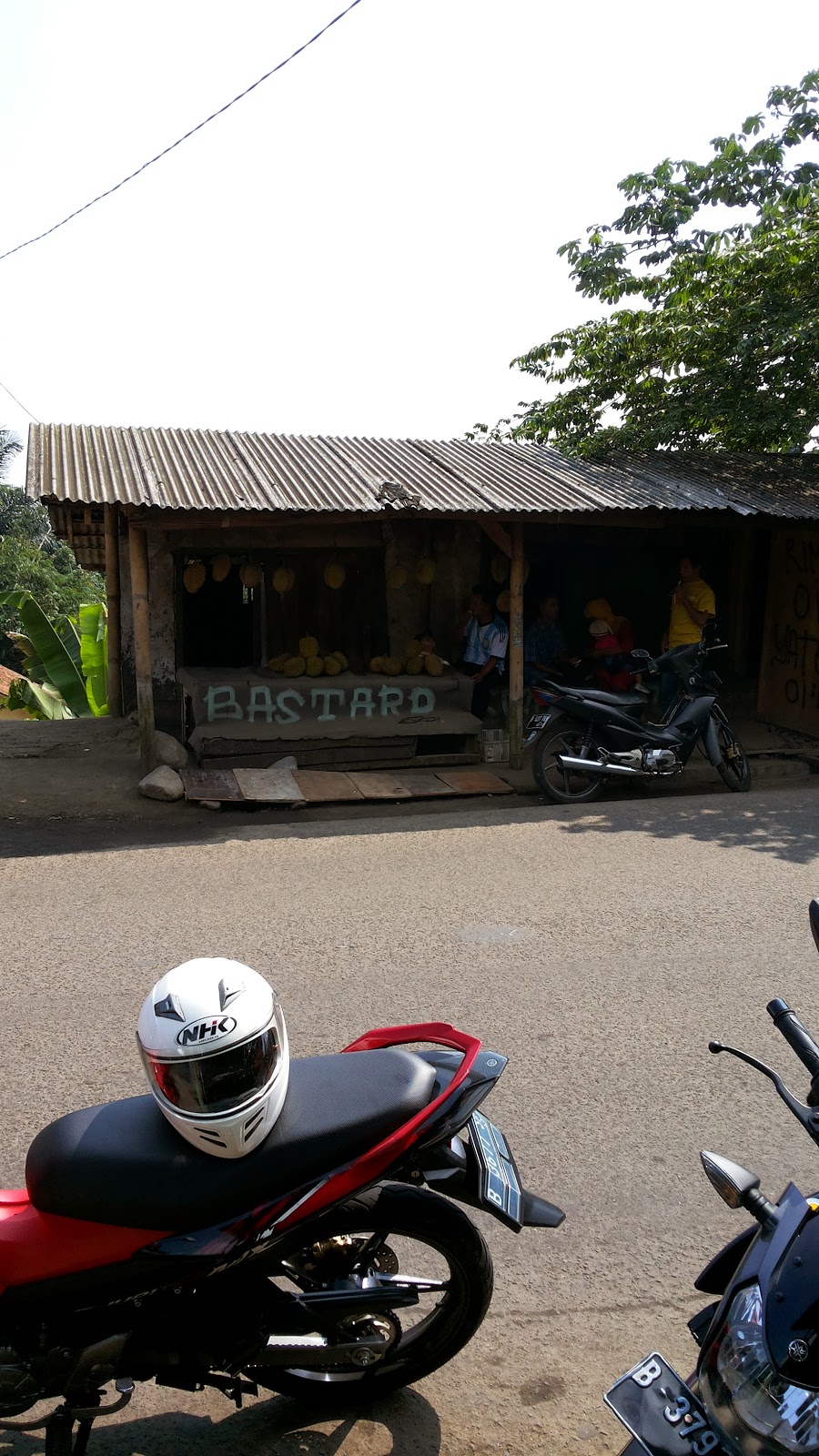 I have no idea where we went, however we were very near Gunung (mountain) Malang in the Ciapus area and we ended up at Curug Luhur Paradise Place which is a waterfall surrounded by a huge water park. Paying 40,000 to get in we wandered through the park without one 'photo mister' and then straight back out the other side, not really stopping to admire this small stream of water coming out of the side of the hill. The water slides and people using it, sort of put us off this a lot. So back on the bikes we went and another 1.5 hours later we were in Bogor again and this time heading for a nice cafe restaurant called the Gumate Cafe which has nice food and even nicer views of the city. 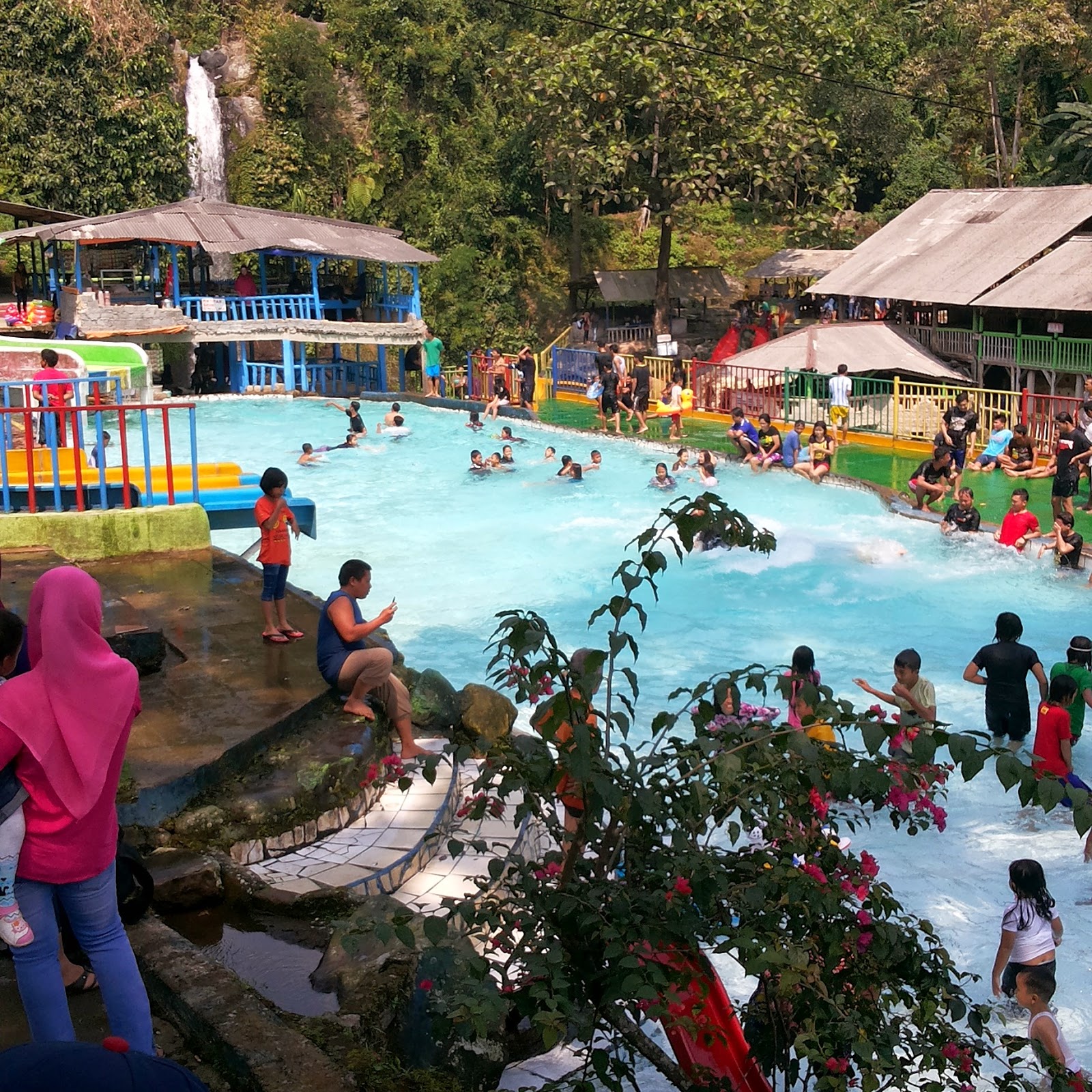 Once we had fed and watered we eventually after some shopping headed back to Jakarta and after figthing through dense traffic we got back to Pondok Cabe and at Pondok Indah said goodbye as I headed home the others back to Puri. By 4.30 I was back at the house enjoying a lot cold shower followed by a nice cup of tea.


A long trip of 200km in the day but a fun trip even if the waterfall did not really meet the expectation I thought it would.