I have just returned from another trip out the country and I went to Singapore for the day. I did not really do anything as I had a very short time there, however it was nice to fly and visit somewhere different for a change.

As many people know, Singapore is currently suffering from the haze and smoke from Indonesia, where land is being burned to make way for more palm nut trees or something. So I was expecting lots of smog and grey skies. I am sure it was there. As I said it was a short trip out and I really could not be bothered to leave the airport. There is enough to do there, so I never really saw any smog or haze.

Actually, I have been to Singapore at least 20 times since 2006 and I have seen most of the sights to see and visited most of the city at some point. I have flown in and out of it. Took the train to Kuala Lumpur from it and had many a cold beer say waiting for visas etc so unless I am there for a weekend then I am not really fussed. I know there is a lot to do when you get there but my budget often wont allow me to do everything.  So this time I sat about the airport.

Flying at 8am in the morning gave me a on time, third full Lion Air flight which was predictably non eventful and there were no issues with immigration on the trip out both here and there.  Changi was emptier than I have ever seen it, maybe because of the low season, maybe because of the smog but it was quiet.


So, wandering around time to eat at McD (they do 1/4 pounders) and then surf the world through the free wifi. However, McD and BK at the airport stop serving breakfast at 12 so it was McMuffins and coffee instead.

Changi Airport offers many things and in Terminal 3, it offers loads of things. Quiet areas for sleeping,showers,  a Cinema, A pool, a butterfly enclosure, bars and shops and free Wifi. You can get access to the free wifi in Arrivals by going to an information desk and the helpful people will type in your passport details and then give you a slip of paper. You follow the instructions and you have pretty good connection all around the airport. Once you have checked in, then you need to do the same thing again. Find a customer service desk and ask for free wifi. They will also give you a piece of paper with instructions and ask how many devices you need it for and then again, follow the instructions and you are off.


Now, what else was there? Oh nothing. I didn't anything else. I took a plane back at 5pm and was  home with the wife and kids by 8pm. A small adventure even if it was not the most exciting of one, but not many can say that they popped to Singapore for a few hours for something do.

Another week gone and more or less as tired as normal. I am currently teaching mornings and then doing my day job later in the day. The early morning teaching is still hard work but not as bad as last year because I am now used to being awake and moving about from 5.30am so being ready to teach at 8.30am is not so bad.

I am still there at St.Ursula, in the middle of the city but I have changed from elementary school to senior high school and this is for girls only aged from 15 to 18. Its a new challenge for me and less noisy so thats a good thing.  The views of the school as well are good. I am sure to post more pictures over the weeks of my time there but here are some shots from last week. 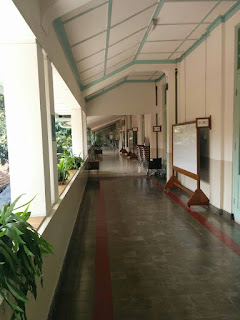 The class rooms themselves are still very traditional wooden desks and chairs and the most alarming the floor tiles (photos to come) remind me of the floors at Safeway where I once worked, as it they are I believe, the same pattern.

However much fun it is there, when my classes are cancelled its equally as great as I found out on Friday and as luck would have it, this allowed me to meet an old friend and colleague.

Back in the day when I first started with EF I was a teacher and I lived in a teachers house with everyone else. It was fun. The number of teachers grew and so a second house was called on and so I moved. It was far nicer. Teachers come and go and you have fun along the way. From the original western teachers that I worked with between 2007 and 2008 in Cengkareng; 5 of us remain in Jakarta as far as I know. Everyone else either moved on to somewhere new or went home after doing their year.  Keeping in touch with those I worked with is probably almost the same in number, be it through Instragram, Facebook, Whatsapp but some you still keep in contact with and some I still meet on occasion.


So hearing that an old colleague was returning for a holiday as part of his honeymoon was great news, especially as he was coming from Canada.


It was good to meet Dagan and his wife and we spent some time catching up over coffee and cake on Friday morning. Its good to see people move and develop and know that life goes on. Sadly Dagan lost his hair along the way, but his vests are the building blocks of legends!

Hopefully before he returns west again we can meet up and he can say hi to Yovita and Jeremy as we could not do that Friday. If not then again in another 7 or 8 years!

I have been in Indonesia now for many years and for a few of them I had an Internet connection to the place I was staying. Since 2000 I have been connected to the web and probably at some point became hugely dependent on it for entertainment and knowledge, so much so, sleep and getting things done became harder to achieve. Then I moved to Indonesia.

For the past 8 years an Internet connection in my home has been a dream. I did have internet at the apartment I was in but it was slow and limited but I could open things like HTML pages and maybe browse the web early morning or late at night, otherwise it was not great. Apart from than that I have made use of free WiFi and the crappy inconsistent 3G signal the country has to offer.


I have bought into Bolt the 4G/3G OTA provider and its actually very good as there is a constant signal in the house. 3G on all networks where I am is patchy and unhelpful and frustrating. Real connected Internet is not possible currently due to the place I live and the distance from the nearest connection box. If I rented a telephone line then I could have the Internet via that option, but the service is lacklustre and not reliable. Our laptops remain closed and not able to be used, which is a great shame to me.

My phone and tab both are therefore used heavily to help meet the needs of the family for searching and browsing. Jeremy uses my tab for watching stuff on YouTube and I like to browse and chat and read through the net. If I had a real connection then I am sure that I would not even want to watch TV (which I dont really want to do now) instead use the net for shows and things as it is more preferred. As it is I have Indovision with extra channels and of the 200+ I watch about 10 (3 of them are for children under 6).

Happily/Luckily work is a wifi zone and the internet is great as it works most of the time so I can, should I choose to, connect and browse when not researching materials from there. The places I eat and visit with the wife and kids are always WiFi areas so that is also good, but that does not help at home. Bolt is as I have said a great provider and has good speeds but it is overall expensive especially for a family which are on line a lot.

100k (rupiah) gets you 5gb and 8gb free. The free stuff is used between 1am and 8am, which however stupid that sounds is great as I am awake before 6 most days and so all browsing and time Jeremy spent watching videos, should want that, is done for free. So is downloading offline YouTube content for viewing later, another useful idea for spending the free allowance. But then at 8am things have to be shut down so that the data is not all gone in a day otherwise the data cost will be too high.
Network Tri (3) is pretty good at 30,000 for 1.25gb but I dont have a signal but outside the house, it is often very good.

But again it needs to be controlled.

Gone are the days of SMS whereby should you send 4 SMS to the same number on the same network as yours you would get another 20 free, nope we are all using Whatsapp or Line or something that needs to have at least Edge as the carrier.

Living out in Jakarta has its high points and its plus points but the Internet is definitely not one of them. However, the fact remains that without a decent signal I cant just sit there and scroll through the pages of the world all day, I can actually do things I enjoy more and spend time in conversation with those around me. Something in this day and age which is getting harder to do.