Having finished my teaching at the school I go to in the mornings, I was picked up by the driver and was told that he had to go to Pasar Baru to pick up a camera. Seemed fair enough.

Pasar Baru or 'new market' is a semi covered street in the city and sells all sorts of stuff but mainly shoes and textiles and suits. It is located near Istiqlal Mosque and the Cathedral and you can get to it by going on Transjakarta and getting off at Pasar Baru, by train from Juanda or just take a taxi there. Easy.

It is very reminiscent of Petaling Street in Kuala Lumpur or a poor relation of it. Both are covered and full of stuff but as usual in Jakarta you can drive your car or bike through the street which in my opinion is a big mistake.

I ended up in an airless no AC plaza which had no working escalators and seemed to have had better days although I was told the camera repair shop is one of the best there. Who am I to argue at that? 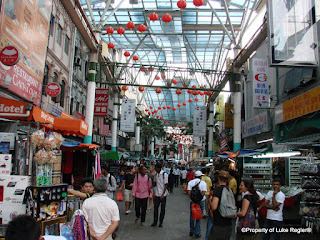 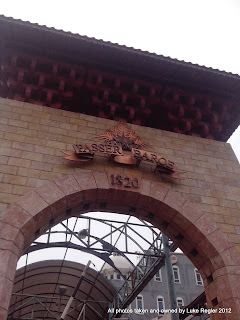 The big arch on the way in, Pasar Baru Jakarta 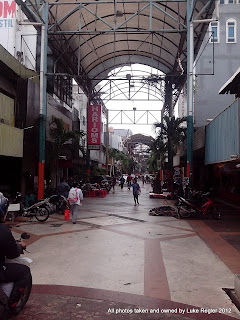 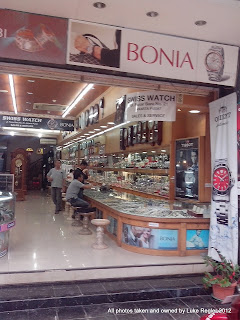 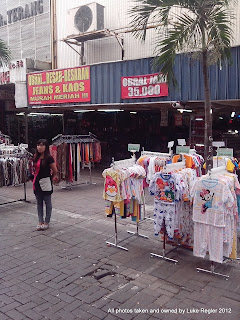 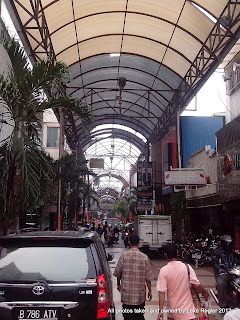 Why are cars allowed? 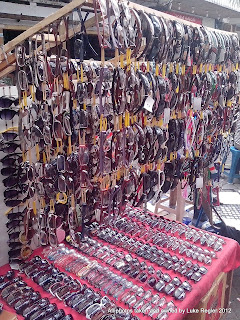 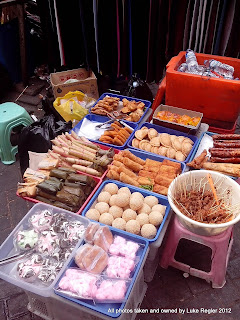 I don't think I would enjoy the place when it is busy but it was an interesting to have a quick wander around and see whats what. Not sure it is a place for tourists either as there did not seem to much in the way of tourist tat and stuff, although I am not again sure if that is a bad thing.
Posted by Unknown 10 comments:

This is the tale of the one that actually got away.

Riding home last week, I went my usual way to get home via, Blok M plaza, Polim and then towards Tendean and then home.
Somewhere very near Kemang, I was in a huge line of motorbikes, when all of a sudden everyone started backing up and begin pushing me out of the way. Unbeknown to me, there was a policeman hiding behind one of the new flyover struts and was taking motorbike keys out of ignitions, and then all of a sudden, my key also went.
Handing over my STNK, I got my keys back and was told to go left somewhere. Following the other 'caught' riders I did that and waited my turn with the police.

It appears that I was in the wrong part of the road, alongside 50 other riders and that was dangerous and illegal and so I was to be fined for that.

Anyway, so I stand about and watch the police talk to the riders who had passed over their licence as well and the negotiations began. One rider, just handed 100,000k over and left, another handed his SIM and then was given a receipt and left. I was told to sit down.

Asked if I spoke Indonesian, I said no. This seemed to confuse the policemen and they kept talking to me in Indonesian and asking me to sign the form. Looking at the form, I asked where the police station was and they said Kemang somewhere, and I asked for a map. Silence. I then asked what time, and they said 9am. I said 7am as I had to go to work. Silence. They then asked me to pay 100,000 which was one of the amounts also printed on their form and to sign the form. It being dark, I said I could not read it. They were looking not too impressed with this. Another policeman then asked for 200,000 and I said I had no money and where was the ATM. Silence. I pointed at the form and it stated 4 amounts: 100,000, 250,000, 500,000 and 1 million. So I asked why I needed to pay 200,000. The policeman showed me the back of the form which meant absolutely nothing to me.
I asked which amount they needed me to pay as they were all different figures. With the policemen talking at me, I pulled out a piece of paper and a pen and asked for their names and numbers so I could discuss this with their superior. Silence. They seemed to look annoyed now.
Still being asked if I spoke Indonesian, I asked if they spoke English. Which they said ' we speeek no Engleesh' and so back to square one.
After a few more minutes of hopeless determination, one of the policeman explained riding was dangerous and had to be careful and so I acknowledged that and then pointed out to them a bus with no lights and several riders with no helmets. Silence.

I was then asked what I wanted. 'To go home because I am hungry' was my reply.

At this point, I could see that the police were finally giving up with me and so gave me my SIM and STNK back and let me go.

I smiled at the rider waiting as I left and got on my bike and headed back into the traffic.

A lessoned learnt for sure, and I will always be vigilant on my travels. I am not knocking the police for what happened as I know if they spoke English it would have been a different matter.

Lets call this part 1 as I am sure to be including more pictures etc from around where I live. Living in the south of the city is not too different to living in any other part of the city. I don't live in a gated and guarded complex, I live in amongst 'it' all in a busy street, a busy noisy street just off the main drag to Ragunan or Kuninghan.

Still its a vibrant and thriving place with always things happening and people and sellers passing by so that good. Living in a gated compound it was profoundly quiet and whilst that was OK, at times you could forget you were not living in the west as everything seemed so normal. Here, where I am however. Normal is something I can't call it, so much so that I will be staying here for a few more years and taking the death race to work and back daily. Challenge accepted. 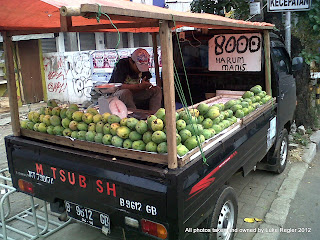 Cheap mangos straight off the back of a truck 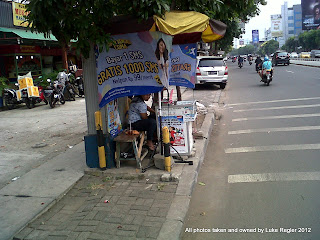 Pulsa on the streets 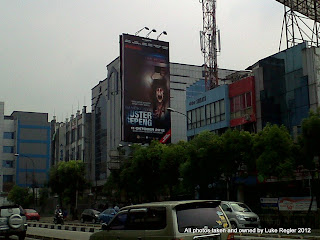 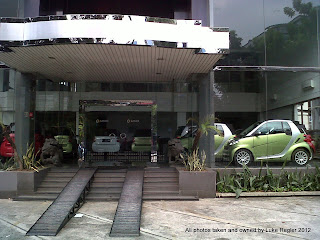 Smart Car Showroom, full of cars you dont see on the streets in Jakarta, so who buys them? 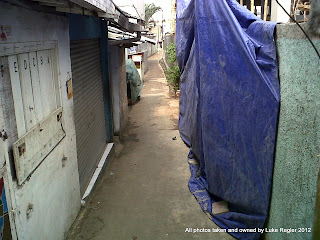 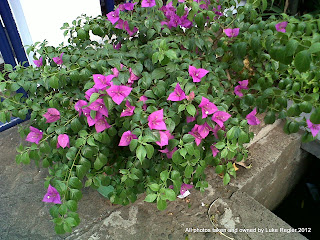 Pretty bush in the streets 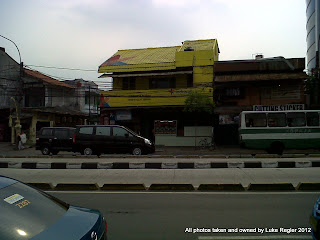 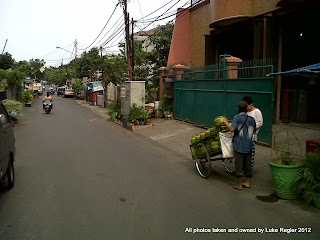 In my street, a gas bottle seller 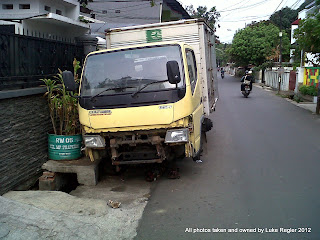 This truck is being refurbished slowly 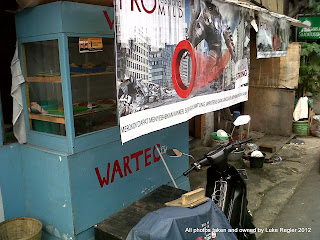 Food stall with outside seating and outside washing up area, not for the faint hearted 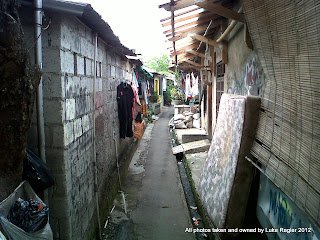 Busy little lane that leads to a mosque, the mattress is probably being left to dry after an 'accident'? 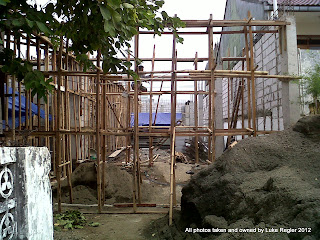 Building a new house with bamboo and no shoes 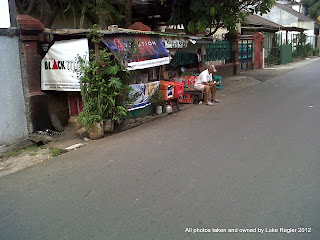 Sunday afternoon is a quiet time for this little shop 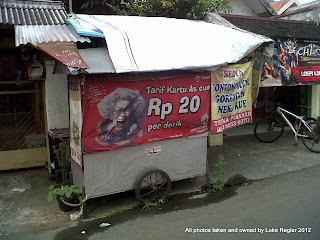 Another mystery food stall. A mystery to when it opens or who eats there.

I think time to start wandering further into the little lanes with camera/camera phone in hand see whats what.
Posted by Unknown No comments:

So reaching slowly into October the clouds have started to form and now the rain is coming if not erratically but its coming, slowly but surely. Last week on Friday was the first night I have had to put on the rain coat and ride home wet. Made a change but everything slowed down and it took even longer than normal to get through the city streets.

Getting bored of risking death crossing the railway between Senayan and Permata Hijau and then fighting all the way to Tendean and racing lights to get home quickly, I have changed my route somewhat and now go via Radio Dalam, Polim, Pasar Burung and then into Tendean via Santa and then down into the melting pot that is Mampang. This has shaved around 10 minutes off the time it takes to get home, mind I am doing most of the journeys home after 9pm so the traffic is somewhat lighter. However it does feel a little safer, although I still have to cut across traffic and some of the junctions are plain scary. Still keeps me awake and its always good to learn new routes through the city.

Rambling on, it now appears that the Carrefour Market and mini plaza thing at Tendean has closed down for ever and will be knocked down and turned into something less useful like posh apartments. That should help the traffic. I kind of liked the Carrefour despite the bugs as it was full of stuff I wanted to buy unlike the local Giant which has a lot of stuff I want but not too much.

So that means more queues in Giant and less choice but still. I can always wander down to Pejaten Village and shop at the equally uninspiring Hypermart. There is a Carrefour relatively near but I have been warned its not the nicest of places nor the friendliest or the safest and with the rumours of people being kidnapped there, well best I don't go at all!

Haven't been up to much what with one thing and another but I must admit I have converted from Starbucks to Coffee Bean due to better coffee and sandwiches and whilst more expensive, they seem nicer. The one in Pejaten Village is OK if they have sandwiches and if there is not live music event directly next to it.
I managed to have a crafty curry on Saturday in Eastern Promise, Kemang and the Beef Madras and Beef Bindaloo (Yovitas, she likes curry as well) were excellent and the beer of course was just what was needed.

I am lucky (?)  enough to travel into the city twice a week now on a teaching assignment somewhere right next to the main Post Ofice at Pasar Baru. I really should take photos of my trip but I am trying to wake up and also drinking red hot coffee in the car and it takes almost all my energy not spill it on me and suffer 3rd degree burns.

The buildings themselves are magnificent old dutch buildings and as the school is built next to the Cathedral I am trying to get a free tour round the place to see it all for myself. Watch this space. 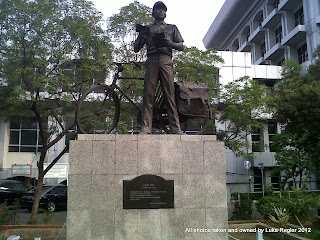 Outside the post office building next to Dunkin Doughnuts 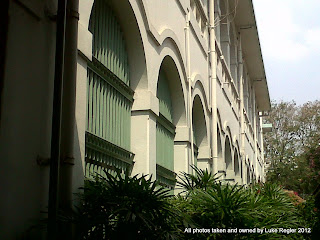 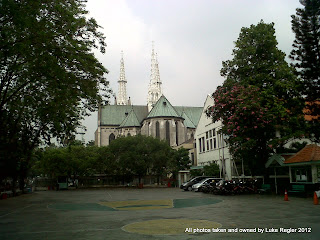 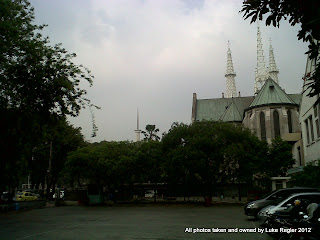 Religious harmony, the Istiqlal Mosque can just be seen as well 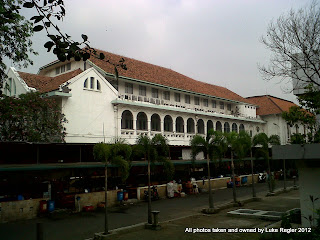 A better view of the school