Jeremy is on You Tube

Finally after nearly 3 years I have put all Jeremy's videos onto You tube where they can be kept safe forever or at least until Google and YouTube close. I am slowly building a library of his life for him to have when he is older and to help him know who he is and where is has come from. This for me, is important.

https://www.youtube.com/channel/UCx2omYh8b9VJIPWG2qdShIg  is the link or just search for him in You Tube itself.

Quality such as this...

Oh, don't forget because they are personal snippets don't expect polished superior quality movies or any with coherent reason or purpose.

Thanks
Posted by Unknown No comments: comments

Raining. Raining hard and nearly everyday so far in February as predicted. My rain coat and trousers leak and so I have a complete spare set of clothing at work at all times. The things I need for work (phone, tab, charger, headache tablets, glasses, random stuff I always have) are wrapped in plastic so that they don't become damp. My bike helmet feels permanently damp and smells and leaks so it rains on both sides of the visor. I only have 3 choices of footwear for riding my bike as I cant find rubber boots that would fit here. At home, The AC is too cold in my bedroom now as we had it serviced (it now leaks) the day before it cooled down from 38 degrees to 29  and because we are drying the washing inside, the place smells like a laundry.

A video of recent rain from my balcony

It normally looks like this from my balcony, often with blue skies 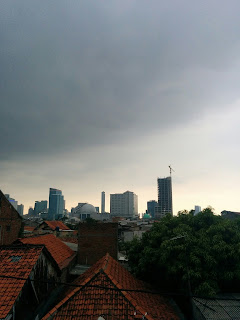 Still, on the bright side, with all this rain the bike shop does not open late so the noise out front is less so that's good. We have new neighbours who seem intent on banging walls all night, all day for currently no real reason. With there being 5 or 6 adults living there now, the water is now being turned off for nearly all day and night as the configuration of the plumbing will undoubtedly create higher bills so by turning it off we should save us some cash.

We have just celebrated Chinese new year but I don't remember hearing a single firework. Now that might have been because of the rain or there are just very few or no Chinese people living around my house now and as a result, you would have not guessed that Sunday evening was a very important date for over a billion people. However, it was a day off for all on Monday so that meant more sleep and for the first time in nearly 3 years, I woke up at 8am! Even Jeremy never woke until after 7. I guess having a colder room is blessing after all.

Not the busiest of times as I have not actually been anywhere this month as far as I can remember other than for coffee or shopping. Sleep seems to be really useful at the moment.

Jeremy is becoming even heavier and bigger and his energy appears often limitless. He isn't sleeping in the day, but sometimes around 7pm he has a tantrum and passes out but should he sleep, then he is awake until 9-9.30pm. Through the day for him,  its Thomas and friends or his cars. Maybe books or TV but mainly play and talking and singing. He now knows:
The wheels on the bus
Twinkle Twinkle
Baa Baa Black Sheep
Random You Tube songs which are catchy and easy for him to say the words.


Last week he asked to go to school and this morning he asked for a horse. Classic


Posted by Unknown No comments: comments