September has almost gone. The rains are setting in. The floods are here and on sunny days its really skin burning hot. So nothing new really.
I have been getting used to longer days again and travelling across the city early in the morning and well after 5 years, its not that hard anymore. There is still something nice about Jakarta at sunrise as the city is still waking up and the streets are becoming busier and busier and the sun is looming large as it rises from 6am.

Back to St.Ursula I go and finally I have left Dunking Doughnuts. Their running out of coffee routine is not a good routine. Now there is a Starbucks next door to the school. A brand shiny new one which opens at 7 but the doors are open earlier so nothing is ready but the staff are still happy and smiley. So that's good. 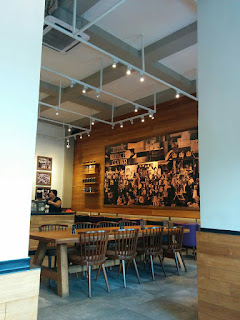 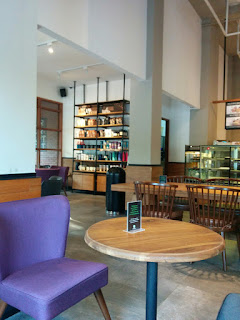 I get to sit there for a bit and relax (even further) and then take a short walk to the school. 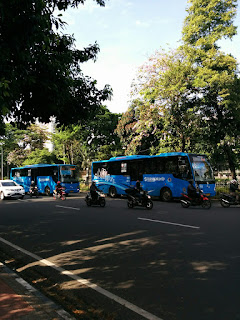 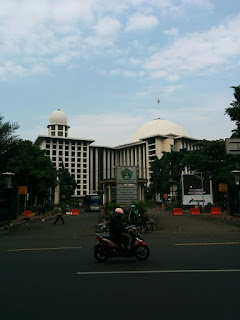 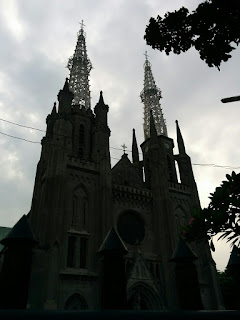 Walking to school I go past some historically important parts of the city, namely Pasar Baroe, The Istiqlal Mosque, St Mary Cathedral and I am short stroll from this fellow 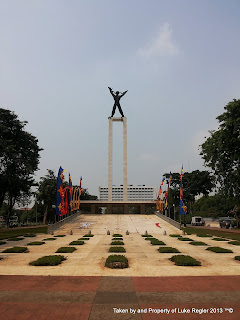 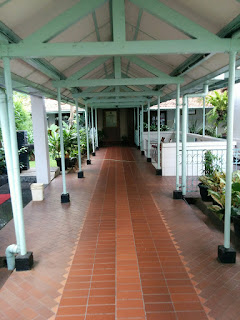 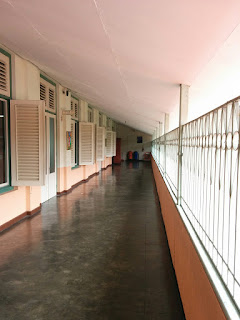 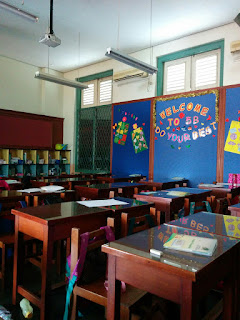 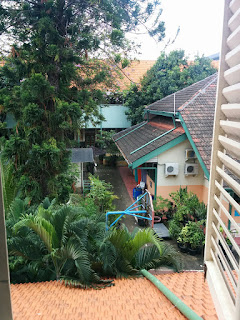 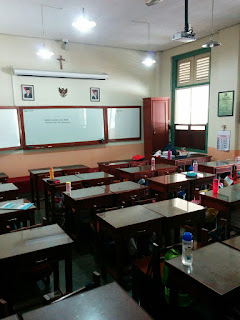 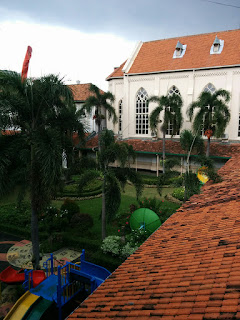 The pictures are from the Elementary school

Jeremy has been busy too and made a new friend who was visiting from Australia. So he was lucky to spend a few days talking incessantly in English to another little boy. Guided by his aunt I am sure their days were full of mischief 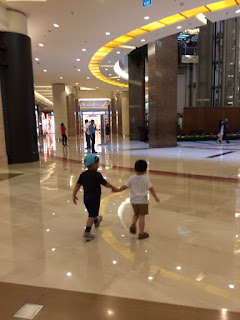 And here is one of us in a lightning storm last Sunday at 7.30 at night. 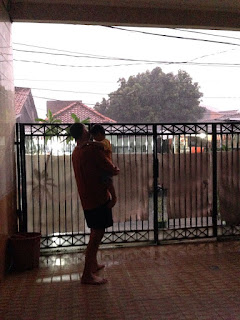 Jeremy has fine hair, it curls a little as it gets long and that's the same as my hair. Its also fair to say that his grows at a fast speed and he has had probably no more than 5 haircuts in total. Ever. So when the time came this weekend, it was to be another noisy affair.


Yovita had spent 4 days talking Jeremy round to say he wanted a haircut even though he doesn't like it and creates merry hell when has his haircut. But he eventually became excited and started to demand he went to have his haircut (a true sign he didn't mean it) and so on Sunday we went. Actually we went Wednesday, Saturday and twice on Sunday because every time we showed up the place was closed.  But eventually we went up the road and round the corner and the small open air barber shop was open.

Jeremy froze. Clinging to his mum, the barber proceeded to attempt to give him a number 3 all over (because he is not allowed a number 1, which is better) and the barber being a most patient man endured 20 minutes of head turning, screaming, wailing, being told to stop and tears to actually give Jeremy a pretty good haircut. The noise was enough to make the locals look up. Me smiling never helped.


And then it was my turn. Out of the chair went Jeremy, and in I went. This made Jeremy very happy and he then immediately stopped crying, screaming, complaining and wanted to know what I was doing and why. Also 'silly daddy having hair cut' was uttered and he was straight back to being happy carefree and calm about everything.

The result?  I ended up with a nice all over number 1, Jeremy a number 3 and the barber a 20,000 tip for 2 hair cuts that cost 30,000 in total. I did cut a few loose ends off him later that day when he was engrossed in Paw Patrol but he was fine with that.


Now we need to have him stop telling us he needs to go to hospital because he is sick and play on the slide. Because he isn't sick and and the slide is too small for him and we don't want to take to see a doctor. Bless. 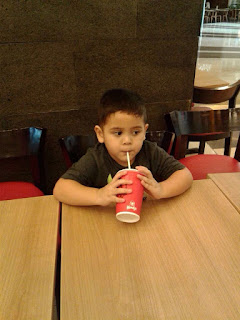 Last weekend I took the family to Bandung for the weekend just to break up the normal routine. We stayed in the same hotel as last time, the Ibis Styles Braga but choose the family room so it would be easier.
This time we used my works driver and car (the car is free, just pay fuel and the driver) and drove there. 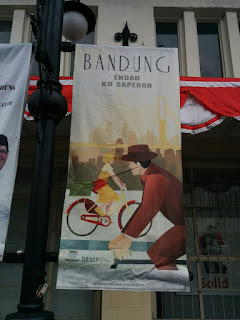 Jakarta to Bandung is about 120km to the east of Jakarta and up in the mountains so it is cooler and more temperate. The city is smaller but equally full of traffic but it is nice and there are a lot more interesting things to do and see, should you want.

We left Jakarta at 10 and soon found the traffic stopped in Bekasi and then once we got past split to Cirebon the road opened up and we were able to go quite fast. The traffic overall was OK except on some major hills and where there were road works. It took around 4 hours to get there, which is the norm.

Once we hit the toll booth and paid the 52k we were immediately stuck in traffic and google maps had the pleasure in telling me that it would take over an hour to get to the hotel regardless which way we took. So instead of taking the most direct route, I folllowed Google maps advice and went off on a mystery tour. And it was a mystery tour because we ended up in the smallest of streets behind the airport and then way out of the city, only to find another road which took us there pretty much directly and it took less than an hour. Google maps did a good job all in all.

The room in the hotel was larger and had 4 beds. We were advised that if the room smelt of smoke, because this is a smoking room, then they would move us free of charge but we never found the room smelling of smoke, but there was a strange smell regardless. I guess the smell came from where the water was getting out of the shower and under the wooden flooring. 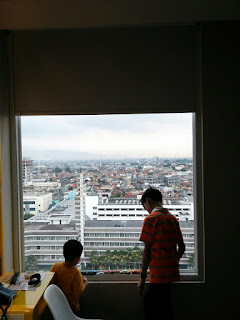 The room unlike the last one was not as well maintained and so there were some problems with the AC switching off, lights not working and the floor. We complained that the free Wifi was not letting us access it. They give free wifi access to the 3 gadgets but if there are 3 already registered and you want to swap on for another, the system would not let you. We had 5. So that was annoying but not really the end of the world.

We ate somewhere in Braga and managed it fairly well with an active Jeremy. He had been good as gold all the way to Bandung in the car and he was still super active when were there. During the evening Yovita went out for food and so I stayed with Jeremy with the hope to get him to sleep but he didn't want to. And when he did he woke at 3am, 6 hours later. 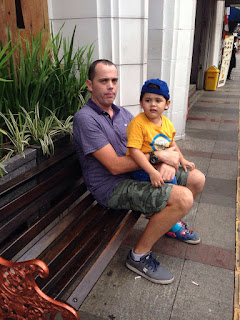 He sat still for 15 seconds

3am in a hotel room is very boring. I was awake with him on and off until 6 when we all got up. We ate at 7 and then wandered into the car free area so Jeremy could run a bit and see the steam roller again near the hotel. But it started to rain so we went back to the hotel. 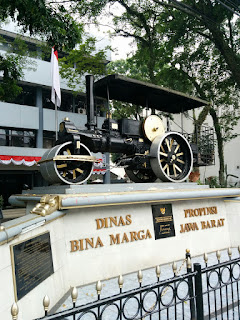 After some discussions, we decided to leave Bandung and head back rather than stop off and do some shopping, so we left the hotel around 10.30. We got back to the house by 2 after stopping off for some coffee and also to buy some groceries on the way back. The actual trip home took 2.5 hours which was good.

All in all it was a quick trip there and back and I think next time we will take the train again.