A ride to work


Having ridden across the city for the past 6 years, I seldom share images of whats going on and how the journey is, yet I do mention it rather a lot.
So with taking motorbike taxis becoming more frequent I have the opportunity to actually see where I am going and share some of the things with you.

Here are some videos from my camera as I went to work today. They all involve major traffic spots and just after peak morning traffic.


This one is from the start of the chaos past a new flyover to help traffic from the east of the city get into the city if people are not using the main toll way. Before this thing was being built it was not nice to ride through. It's even less nice now.

Next thats us getting through the traffic lights and past more traffic. You should understand that my daily journey is pretty much like this everyday although there are times when I can see the road ahead.

Finally this is us getting past the last major tollway exit to the business part of the city and its not that busy to be fair and with the amount of police present there is some behaviour of traffic. All the buses are full.

Here are some other photos 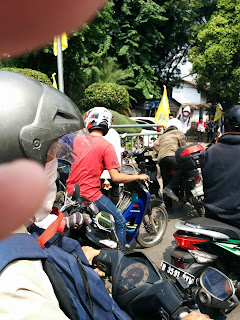 Then the customary bike crash you see everyday. The amount of commotion around it prevented me from better pictures but it looked like no one was hurt and a taxi driver was either sorting it out or trying to say sorry. 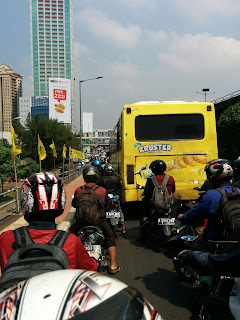 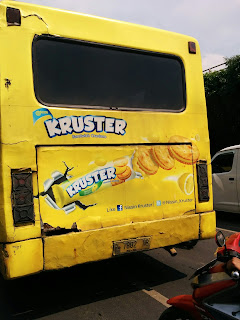 The view to another traffic hot spot (there are over 400 of these through the city) and a close up of a the back of a bus which is a place I try to avoid due to the jet black smoke they produce. 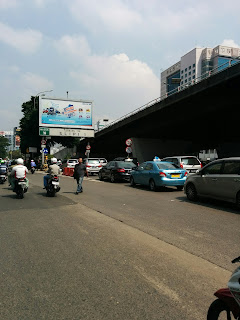 A very busy toll gate with random man walking through it all for effect. 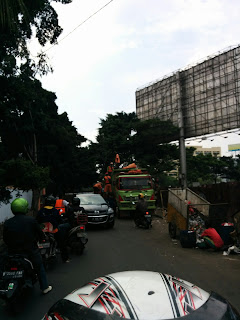 Finally, you know how everyone complains about the Rubbish truck when it does its rounds? Does it look like this? This truck is there everyday and leaves full. It is parked on the road and the rubbish collectors have to throw the waste into it everyday. The traffic around it pays this no attention. 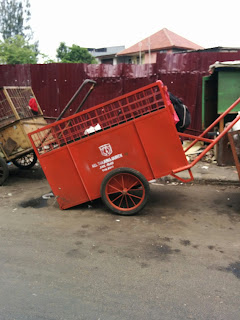 This Orange cart is how household and business waste is collected. Some just collect plastic or paper and cardboard but most collect household waste. The smell is amazing. 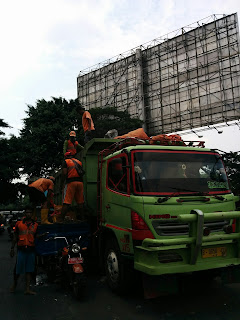 The human chain to load the truck.

I might venture out with my camera to take better pictures especially in the rain, that will be fun,

The dry season has well and truly been dry and the dust and soot more visible than normal. Jakarta is its normal lines of wet and dry but there seems to be a bigger change in the weather with some more longer periods of wet weather and storms as we approach December.
Naturally it hasn't seemed to stop raining in the mountains and hills around the city and some of the low lying parts of East Jakarta have began to flood already.
The Jakarta administration is saying that this year won't be as bad as last year or as terrible as 2013 and the city will flood for a day or 2 but to be honest no one knows.


For the past week there has been a team of workers shoveling the mud out of the drains near the mosque by the house and hopefully all that effort will finally stop the flooding around the mosque and housing. Similarly there has been some local roads raised up through layers of concrete to stop flooding as well so that again should help the locals.

I am currently using motorbike taxis which are becoming quite fast and less stressful even if my hips seem to seize up after sitting in the same position for 45 minutes but I will become worried if it rains and whether they will be available in the rain. If not then the trusty bike will push me through the rain and puddles and I guess that will be OK.

However, I  must buy some new waterproof trousers and jacket just in case as the ones I have now leak.  Riding in the city is so much more fun in the rain.

After 8 years of living on the Island of Java, I  have finally stayed in the second most important city on it and maybe in Indonesia, Surabaya. Surabaya is in the east of Java and like every other city in Indonesia consists of lots of traffic, heat and bad buildings. Apart from that, the only other difference was the lack of very tall buildings.  Hows that for an introduction?


So, in order to explain how I came to that conclusion here is my story. Last week I attended EF English Firsts annual conference which was held at the JW Marriot hotel in Surabaya. I left Jakarta on Tuesday with my manager and colleagues from other centers and flew Citilink to Juanda airport. Our flight was at 10.00pm and we got there after 11pm.
Citilink are a good airline as their flights are normally on time and the planes are pretty good. Being the low cost carrier belonging to Garuda helps as well with that.

From the airport in Surabaya we took the 34km trip to the city (that's what Google Maps says)  and to the JW Marriot hotel. It being late at night, the traffic was pretty good and so we were there in no time or just around an hour.


On arriving at the hotel, we were met with armoured cars, armed police and a tank due to the fact that the president of Indonesia Joko Widodo was staying the night which added to the fun of arriving late.
Walking down the red carpet to check in I was met by the head of the Hotel and wished a pleasant stay; He didn't look stressed at all! My room was on the 7th floor and so I went to drop by bags and then join some friends in the bar to say hello. On entering the room, I discovered it was a smoking room and in one of the single beds in it, was a man fully dressed dozing while the blue haze of cigarette smoke hung over him. I bid him farewell and went back to reception to complain and get another room.
This action got me a new non smoking room and it was all mine for the night which was even better.

I did eventually share the room with a nice chap from Depok (a satelite city outside Jakarta) who would try and feed me every night croissants or whatever he bought downstairs. That was very nice of him. 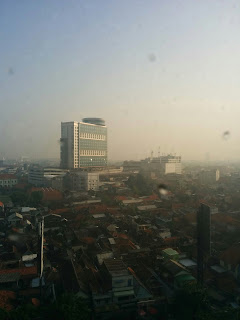 The conference itself was highly enjoyable and there was lots of sharing and chat and a good party at the end of it. English First is celebrating 30 years being in Indonesia and that's a very good thing. There 74 EF language centers in Indonesia now and that number is growing. Its a big organisation with over 280 attendees and there were people missing due to holidays etc so that number should have been closer to 300.

Friday morning arrived as did a few hangovers and after the last of the meetings and discussions, it was time to checkout and on yer way, but eat first as lunch was provided. We were flying back later in the evening and so we had time to explore the city. I went with some friends to the nearest AC mall, had a coffee and waited for time to pass. Eventually enough had passed to get a taxi back to the airport and fly home.

What did I see in Surabaya? Nothing. Where did I go? Nowhere. Will I go back? Well, maybe. The hotel was nice. That bit was OK but I really never had any time to explore and still don't know where I could explore in Surabaya although I am pretty sure there is lots to see. So perhaps in time I will visit it again. The flight was good and the hotel was very good. There are plenty of taxis around to get you places so I might return.

Please feel free to comment and I will reply as soon as I can. Thank you
Posted by Unknown No comments:

There is a new thing happening in the city at the moment and it is spreading across Indonesia at quite a rate. 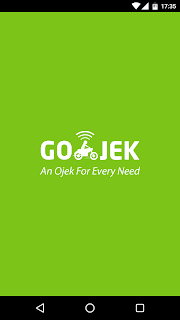 The arrival of paid / uniformed Motorbike taxi riders or Gojeks (Ojeks is the common name for all motorbike taxis) is a new service being offered.

Basically, you book a bike to pick you up from your phone (its an app, they love apps here) and then a man arrives on a bike. He gives you a helmet a face mask and a hairnet and then takes you to wear you want to go for a fixed fee. Tip him or don't, its OK he gets paid by the company to take you.

So its pretty good value and there is insurance too. 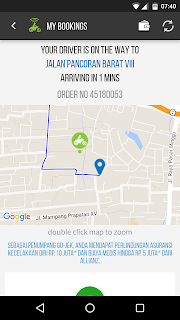 I took my first Gojek  recently. However, the GPS on my photo for some reason was not operating properly so the man thought I had cancelled when he called. Then he did not know where I wanted to go so I had to direct him all the way. It was however still 15,000 and with a tip of 10,000 it'd still easier.
On the way back, I could not get a phone signal so a colleague ordered me one. He arrived and took me pretty much straight back home; 15,000 rupiah plus tip and no issues.
We rode through 2 police stops as well which was good as I am sure I would have been stopped had I been riding alone.

However, I can't take them everyday as the cost is still high over the month and the guarantee that there are some Gojeks waiting about is not always there but I will use them more now I understand how to. 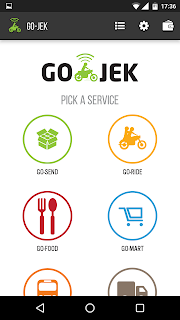 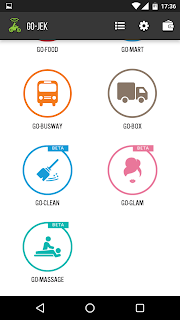 GO - HOE has not been created yet and probably wont be (not legally) but I am sure there is a service out there already, its just I am not aware of it. Although it happens in Kuta, Bali!

So they have a lot of different services and they are expanding.

There are other players out there now, namely Grab Bike but they are more expensive but maybe I will try them. They also have Grab Taxi which is slightly cheaper than normal taxis and Grab Cars which are private cars for hire and they are far cheaper. And apparently you can hire a Ferrari or something through them as well if you want to show off. I don't.