It was a cold rainy morning when I left my parents house back in January 2007 to get the bus to the travel lodge at Gatwick where first thing the next morning I would board an Ethihad plane and fly to Jakarta, stopping in Abu Dhabi for a bit before the long stretch across the Indian Ocean and then arriving in Jakarta.

Since then I have returned to the UK only twice and whilst I perhaps should have returned more often, I have been more than happy here. Knowing that the future here is more cloudy and uncertain than being in England adds an edge to life and also has taught me how to cope and accept what I have rather than what I think I need.

I also got married and we now have a healthy if not a large overly energetic 3 year old who will be starting school this year!

My work has seen me move from being a teacher to a senior training manager (its a title) and from Cengkareng by the airport to Puri Indah by the toll way. My job is as diverse and challenging as ever and the grey hairs it has given me are probably all down to the fact that I take what I do seriously and want to succeed.  My home has taken me from shared teachers houses to apartments to small housing where I was robbed to the current over valued house I am in now. But where we are is great for Jeremy because he is near all Yovita's family and so that helps him grow and be among people who care for him.

Ten years in Jakarta and despite a cough and the odd stomach bug I still believe I am strong and fit although running upstairs is often a challenge but that might be because I am not used to it. I ignore the heat more but stay out of the sun. I eat more fresh food and less processed food but never turn away junk food.


2017 will provide hopefully less stressful work related challenges and more new family experiences and with a fair wind and a strong sail the storms that the year will bring will be weathered pretty easily.
Posted by Unknown No comments:

Before the new year we took Jeremy on a trip across the city for something to do and for him to travel by bus and train because it keeps him happy and me too!

Our aim was to take a bus from home to Jakarta old town (Kota Tua) and then the train back to the nearest point to home and have fun along the way. And with it being Friday before the long New Year holiday we hoped the traffic and crowded buses would be less. And actually we were right.

The map above shows the routes from our home. The grey is for the bus and the red is for the train. We took the bus and then changed at Semanngi where we had to walk or run after Jeremy, to catch another bus to go north. However instead of riding the bus  all the way, we became hungry and so got off at Thamrin had breakfast at McDonald's and then we decided not get back on the bus, rather to travel by train to the old town.

That meant getting a Bajai to the nearest railway station at Gondandgia for the same price as the bus (3500 rupiah) we got on a train. By this time Jeremy was very excited. But, the train seemed to stop every 5 minutes for 5 minutes for no real reason all the way to the terminal and so the trip took almost and hour and far longer than the bus would have done and that was annoying. Luckily the train was almost empty and so we could sit and and wait in relative peace. 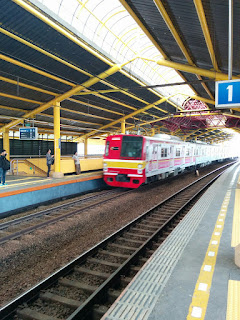 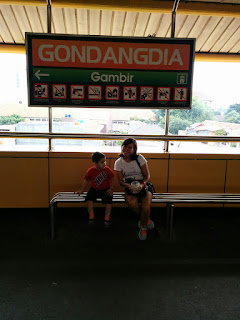 The final stop was Kota Station or Stasiun Kota and it is a grand old Dutch Railway building with a corrugated iron roof but it is for commuter trains only. For travelling across the country you have to go from Gambir. The platforms are shorter than the trains and so you have to walk down the train to a set of steps to get off it and then walk amongst the crowds to get to the building. 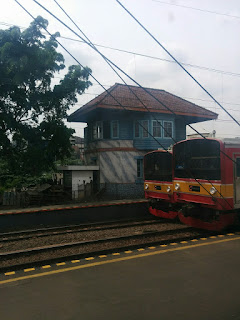 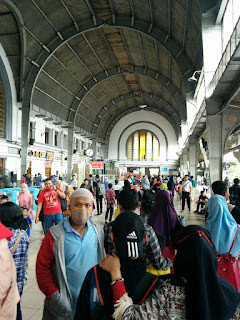 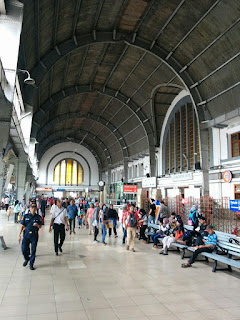 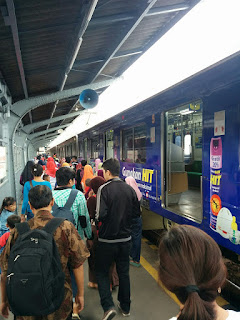 Outside the station it was its usual chaotic self and with Jeremy demanding to wee ( he is practically toilet trained, like the rest of us ) we had to go somewhere quickly and so we ended up at Cafe Batavia.

Cafe Batavia is an old historic upmarket Cafe on the corner of the old square surrounded by old Dutch buildings which are now all museums. It is a lively place and full of tourists, selfie sticks and people riding bikes. 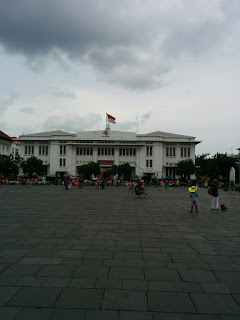 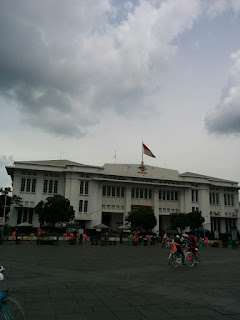 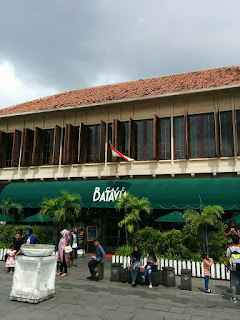 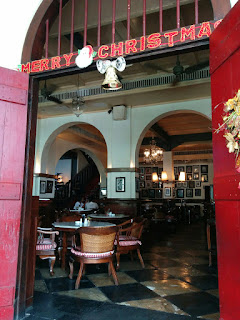 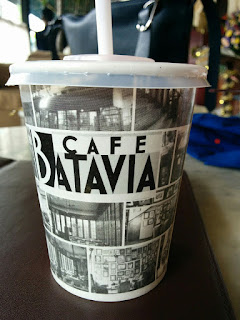 After a quick refresh and photo stop around the square, we decided to move on again and so we headed off in a taxi to find lunch and toys for Jeremy in the nearest mall.

Travelling across the city is fun and quite simple if you know the routes and its not expensive if you use the bus or train. All the Buses we use have AC as do all trains. Taxis are expensive but vital to get somewhere quicker and a welcome respite from people and crowds.