With Yovita sunning herself in Bali I was left literally holding the baby and having to work and so instead of sitting at home and watching TV, I took Jeremy to Batavia Apartments last weekend so we could both a have a night away. It might seem kind of pointless or expensive but a night away often does me good and its fun to have to look after Jeremy on my own and its a bit of bonding.

If or when I ever have enough money,  I would like to live in Batavia Apartments as the apartments are huge, have lots of natural light and offer great views of the city in all directions. Its also close enough to everything to be also a perfect place, but for now I am content renting an apartment for the odd night and enjoying what there is on offer.

So, after rushing about in the morning shopping and gathering the things we both needed we headed to the apartments and checked in. Given a room on the 27th floor commanded some great views and it was enough for us both.  A little trip to the local shops for things I had forgot and then TV on, toys on the floor and relax.

That's pretty much what we did until midday Sunday when we went to pick Yovita up at the airport. Jeremy fell asleep around 6.30pm which was nice but we were awake at 3 and it took him a while to go back to sleep. The morning was spent playing and tidying up and watching TV. He was happy enough and enjoyed running about the place and opening all the cupboard doors and playing with the gas oven, even though he was told off every time he went near it, he carried on trying.

Later on the Sunday I took him to the Airport to pick Yovita up. Her brother drove us and so Jeremy was happily singing and shouting at things as we went by them in the car. The airport fascinated him because he could see air planes, buses, long lines of baggage trolleys being pushed around as well as lots of space to run, which he likes the most. And of course meeting mum.

Jeremy at the Zoo

Jeremy seems to like animals and can name a fair few of them although he still needs to know what a badger is and what it does. And with him now able to be walk and talk and manage long trips and walking I took him to Jakarta Zoo or Ragunan Zoo which is about 30 minutes bus trip from our house.

The zoo opens nice and early which is useful as it gets too hot to wander around after 10am with a small child so we got up and left early.

The bus trip  is part of the city wide Transjakarta and so 3,500 rupiah  (18p) later and the whole bus to ourselves we arrived at the zoo. The bus was empty because it was travelling away from the city and on a Thursday morning in a working week, there wont be many people excited to see the monkeys and that's alright by me.


The North Entrance is straight across from the bus station and so we wandered in, lured by the prices of 4,000 rupiah for an adult (20p) and half that for a child. However this being Jakarta, I was quickly introduced and forced into buying a Jakarta City card for 30,000 and then once I have protested enough over that and made the cashier squirm enough, I was charged 14,000  (75p) to get in. The benefits of being western.


Still Jeremy got into the Zoo free as he was being carried and he is still 2'ish.

The Zoo is huge. I have written about it before and there was much that had changed but much still the same. It was a lot cleaner. There were a lot more signs in English. There were less people trying to sell me stuff inside the place. But there were still empty pens, run down areas and of course misleading signs. The signs for tigers and lions pointed in all directions except the one you needed to go in but it was OK.


Jeremy likes the freedom to run and play and jump and shout and things and so on seeing an Elephant was impressed to say it was big and whats that and then moved on. Giraffes didn't do much either. Seeing some fish made him happier. Then he asked to see monkeys.

Inside the zoo is a well designed and thought about Gorilla enclosure which you have to pay to see and it is worth it. what they don't tell you is that half the cages are empty and the Orangutans have moved to other places. However Jeremy was enthralled by the monkeys, gorillas, chimps and apes etc and was quite happy exploring the caves and walk ways inside it. With so few people there he could be as noisy as he wanted and was more than happy to make such noises. 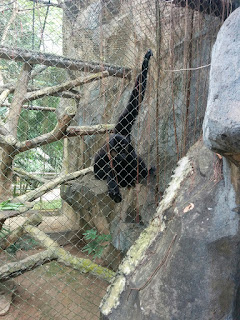 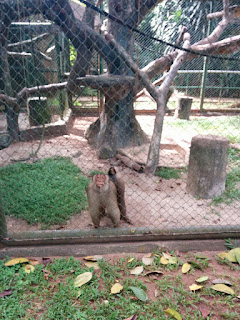 After an hour or more, he was lagging and I was sweating and struggling to find the Tigers but we did eventually and they were asleep in the shade so we gave up and headed back home. However, we will return as there is still much to see; Komodo Dragons, the birds, More big cats, Reptiles and snakes, bugs and things and Camels. I would have taken more pictures but looking after Jeremy sort of stopped that, a lot. 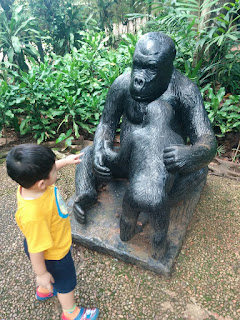 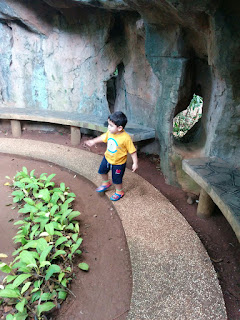 Since going to the Zoo, everyday the he is asking if we are are off on the bus and going to the zoo. Sea World is coming soon, that will be a great fun day for him.

Recently for something to do we stayed overnight in a hotel in the city. We do this a lot as we enjoy staying in hotels and doing nothing all day and night. This time was the Hotel Atlet Century or Century Park Hotel. It is the same place but is known through those different names.

The hotel is really well situated in the city and is walking distance to FX mall, a short journey from Senayan City and Plaza Senayan and across from the Gelora Bung Karno Stadium and running tracks, expo center and things so it is ideal for many reasons.

We booked the hotel through Booking.com which is supposed to be cheaper and easier to pay. We reserved the room through a credit card and was expecting to pay through it as well but when we checking in, the card had not been processed so we paid in cash instead. The strange thing was that when we used the same website to book a room in Bandung,  the credit card was charged on the day of arrival. So that left me a little confused.

The room we were in was pretty nice. It was bigger than what we normally get for the same price but it was basic and a little old. There was a strange smell which could be probably explained away by the fact the room was probably a smoking room and no one has cleaned the curtains recently, but despite all that, it was clean and tidy and everything worked. 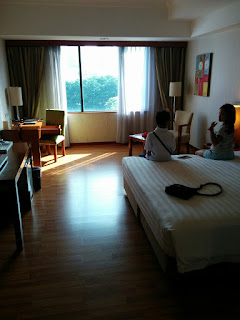 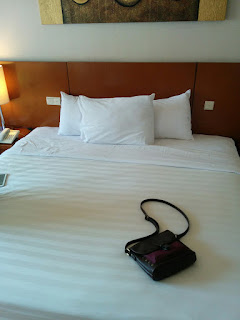 The Bathroom was big but despite its size just had a shower. The taps were loose and it was not in the best condition but was very clean. 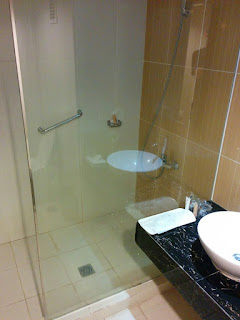 The fact the hotel was next to a mall was a good thing and so that meant we could eat outside of it and get some bits and pieces for the night. Running out of nappies was also let annoying for the same reason.

Breakfast was great with lots of choice and although the food was not that warm, there was plenty of it and I do enjoy eating my way through as much as a I can before Jeremy gets excited and runs off.  After breakfast we went for a walk into Car Free Sunday and took Jeremy to see the toy sellers and to let him run about a bit which he enjoyed.

Although we enjoyed it there, with the sheer amount of quality and new Hotels through the city, we will keep on moving to another and another so I doubt we will return any time soon.