Back in 2007 when I arrived in Jakarta, I lived in a house in a nice suburb of Cengkareng, West Jakarta. It was a 6 bedroom house with maid quarters, ensuite room, and it was a shared teachers house so it was friendly and communal. Just what was needed for my first year. It was also less than 100 meters to the entrance to the local kampung or village area so there were always sounds of street vendors and people shouting and motorbikes racing round. I then moved a few streets up to a smaller house opposite a kindergarten school where they played the same song every morning for over a year. But there was little else in the way of noise. I remember fondly riding my bike from that house to the big teachers house and balancing my dirty washing basket or clean washing on the bike over speed bumps and in and out of cars.
That house was a medium sized house with 3 bedrooms and it was very cosy.

Not long after that, I moved to Puri Indah to start my new job, position etc and so moved into a 6 bedroom house which was and still is mostly an impressive house. It was huge. I stayed there for around 5 months and then moved to my apartment at next to Central Park. The housing in Puri was great and there was little noise from vendors or bikes except the veg seller (sayuuuuuuuurrrrrrrrrrrrrr) who used to shout 'sayur' every morning at 7.

Living on the 23rd floor at Mediterannia there were no such sounds, although the motorbikes did still make a lot of noise all the time with the sounds rattling around the apartments. The odd car alarm going off after being activated by thunder used to make me chuckle a lot.

The one sound  I heard more than anything else at the apartments was the call to prayer from the local mosques all competing or something at prayer time. I never got annoyed by the sounds as it became just part of the background noise you hear on a daily basis. 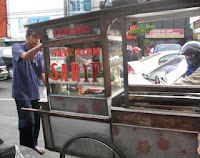 Then I moved to Mampang and a street not too far from a kampung area but not too close. The street is a busy one and there are times when it is very noisy and there are times when it is very very quiet. The most noise I hear is the continual drone of motorbike engines as they go up and down all the time. There is a big boarding house across from my house and that often has music blaring or someone has a guitar and tries to play it into the early hours of the morning.


Surprisingly enough I don't hear any call to prayer and I find that a little strange but OK. I don't mind that much. I do hear to my annoyance more than any thing else the Satay man selling his wares with the most annoying loud car horn to attract buyers. 4 beeps every 20 seconds so it seems. I don't even mind when he stops outside and the smell wafts into the house. I like the smell but not the sound. The 'tock tock tock' of another salesman is OK. Then there is a the sound of a piece of wire being rattled around a frying pan, not sure what that is for. The horn noise of the bread man. The happy Walls ice cream sound. I heard whistling the other night and so can only assume it was the sound of the steam corn man going by. I never looked. 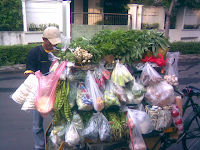 The rubbish collectors have their own calls but I have not recognised that one yet and the veg and the fruit seller seem to be very quiet.

So many sounds through the day and into the night are nice. I don't complain, it is actually quite pleasant to hear the sounds of life around me. The apartment was sterile and devoid of any life in that respect. Just the knock on the door of someone delivering water or food.


Moving back into a house has been a great experience and I am happy to have done so. True it is a way to work but the journey has yet to start to hurt or bore me. I am tanning up nicely! I am learning more about life in Indonesia and experiencing it everyday. By the end of the month I will know how much to pay the local security, the head of the street and the garbage collectors. I am looking forward to making friends with the veg seller and getting my veg from her. I already know the local laundry guys and they already know my name which helps as everytime they ask for my mobile number I shrug and say I dont know. As I dont.

However the guys that fish out what ever they fish out from the open drains in front of the house confuse me. I don't think I would like to that, unless I drop my keys and I am not planning to do that anytime soon.

I love the sounds in Indonesia. Even the Mosque at 5am. It makes me feel less alone in the world. I think it's also a security thing, always having people around.
In our complex we have baso, sayur, roti, bubur, even people who hem up your clothes.
I live in a VERY quiet suburb in Melbourne and when I come home I think I hit this strange kind of depression because it seems so lonely here!

Yes the street sounds are somewhat comforting thats for sure. When I was in England at my parents, the street is just quiet. Only the odd person walking along, very silent. As long as it does not get too loud then its OK, I will survive....

I've red your 2 posts, and consider that you're an awesome person.
The sounds really annoys you much and you don't like it, but you wrote this post in a positive way. I don't know how you could do that. But I like it.

You know, like Samiati, and me too, feel lonely too if lived in a "too quiet" place. The shouts of baso, sayur, mie, siomay, makes me feel homesick, as I'm right now not live in Jakarta anymore.

Hi Radityo thank you for your kind words. I am used to the sounds now and so they do not disturb me as much